That hasn't been the case with book 5 of 52. I started in on three books before I picked one, and then I stopped reading it when I found The Pagan Stone: The Sign of Seven Trilogy

Monday was a bad day. The weekend had been fun (I ate a lot and ran a decent 5k), but the painting of my dining room had taken two wrong turns (wrong type of paint on the ceiling, then the wrong color on the walls), so my dining room was still in my living room. On Monday, I felt sick, whether from a stomach bug or paint fumes, I don't know. Plus, I'd found out that morning that fellow freelancer and former Philadelphia City Paper managing editor Brian Hickey had been injured in a hit and run four blocks from my house and was in a coma (the latest update is that he opened his eyes and grabbed his wife's arm last night when she went to leave -- good news).

So I was sick, rattled, sad and angry. I tried working and failed, so I went to Walgreens for some medicine and came across The Pagan Stone: The Sign of Seven Trilogy

, the final book in the latest Nora Roberts trilogy.

I reviewed the second book in the trilogy for the last book a week series, so I won't go into my Nora Roberts fanaticism again, but I will say this: even though the book is more than slightly ridiculous and I don't like when she writes about demons and such, it was a good break. I could read it after passing out fliers at PATCO asking for information about Brian's accident, and clear my brain. I could read it while having lunch at Caribou Cafe. I could read it until 2am after having a few drinks with Brian's family and friends last night.

As much as I read for work, it's still an escape. Yes, I like books that teach me things, but I like books that take me away from my life and plant me somewhere else. Roberts' books are perfect for that, and even though I might roll my eyes every once and a while, the books do their job: entertain.

I hope to go back to the book I had been reading before, which is another departure from my usual fare. I had just started getting into it when Nora crossed my shopping cart.

The dining room, by the way, is almost finished. It was a PIA to do (and redo because the original wall paint made it look like I'd skinned the Teenage Mutant Ninja Turtles and plastered them onto my wall), but worth it. Still not done, though -- only after I rip up that carpet and have the hardwood floors refinished will it be complete. A house is never done, eh? 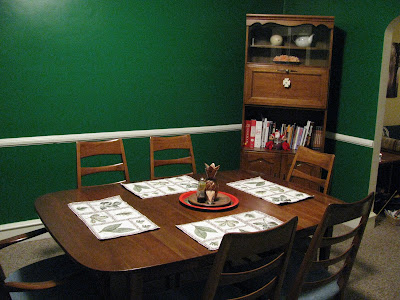