December 18, 2008
I've been sick since Sunday. First I had a cold in my ears, nose and throat (mostly my nose). Then everything migrated south so now I have some sort of thing going on in my lungs. I'm miserable. It makes my dog miserable. So where do I go? Mom's of course.

I bring a few things with me to mom's -- my dog (of course), laundry (since I STILL haven't gotten a new washer...I know, I know...but my computer's dying and that comes first), and reading material. I had visions of sitting by the fire reading a book with Emily on my lap, or at least watching Law & Order.

Unfortunately, the book I brought made me gag after three pages (sorry, Julie Andrews and dad, who gave me the book), and I'd already read through this week's New Yorker, so I went through the book collection in the family room looking for something.

My mom's not as big a reader as I am (then again, most people aren't), and the book collection downstairs is an odd mix of Danielle Steele novels and cookbooks. Though I noticed a few older books sprinkled in, which made sense once I pulled out this one: 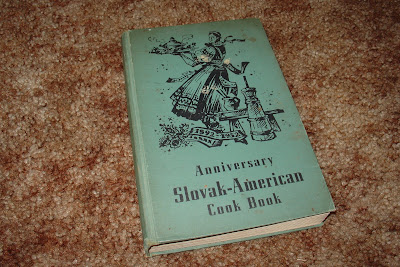 This is The Anniversary Slovak-American Cook Book, published in 1952 in commemoration of the 60th anniversary of the founding of the First Catholic Slovak Ladies Union. It has recipes for wonderful-sounding dishes like butter-crisp chicken, spareribs and lima beans, jellied pigs' feet and nut cake. The Anniversary Slovak-American Cook Book is still being published today. It's in its 25th printing, and apparently what I have here is a first edition.

This volume had to have come from my grandparent's home. My mom's mother is Slovak, her father Italian. This year, my mom and her seven siblings sold their parents house since my grandfather has passed away and my grandmom lives in an assisted living facility. I've found bits and pieces of my grandparents house around my mom's home -- his crabbing hat hanging in her studio; a toy horse in the basement; and this book among an old edition of The Betty Crocker Cookbook and back issues of Cooking Light.

My mother's family is of a strong Catholic but mixed heritage. My grandmother is Slovak. My grandfather was Italian. My grandmother's mother died when she was a young girl, so she never learned all of the traditional Slovak meals. Plus, when she raised her kids, the country was in the swing of new foods that seemed so much better (many of which, we're finding out, are not). So our big family get togethers have a mix of foods including kielbasa and sauerkraut but also fresh Italian rolls, spicy meat and something called the "green mold" that my aunt's been making for family parties since before I was born (and does not include actual mold).

My mom likes to say that our get togethers are like My Big Fat Greek Wedding. We certainly have the numbers. But I think we're one generation removed -- at least I'M one generation removed. No one would blink if we didn't marry an Italian or a Slovak, but it was an issue when my grandparents married, and there were doubts about my mom marrying my father since he wasn't Catholic at the time (he converted and he's the only one who still practices). We're an all American mixed up family. And even the book is a representation of that mix my mom saw and we see now. It's not a Slovak book. It's a Slovak-American book.

This is on my mind not only because I'm typing this from my mom's computer on the day before her birthday (happy birthday, mom!) but also because the annual Verzella family Christmas party is Saturday. Sometimes it's annoying to have such a large family with just about everyone living in the area. But usually? It's fun. And loud. And caloric, even if I don't think we'll ever serve jellied pigs' feet.

I've had a nice evening at my mom's. I can't say I've done much except roo through her books and type this post. When I asked for tea and cookies, she brought them for me, and didn't say a word about bringing whatever bug I've got into her home. "You're a good mommy," I just to her. She's sitting across from me wrapping up holiday ornaments from my grandparent's house to give out to vaious aunts, uncles and cousins at the holiday party on Saturday. Yup, special lady.

Emily's done everyting from play with her new toy to try and steal said cookies from me. Mostly, though, she's been lying in front of the fire. I tried to get a good picture, but she kept hopping up when I turned on the camera. Sneaky... 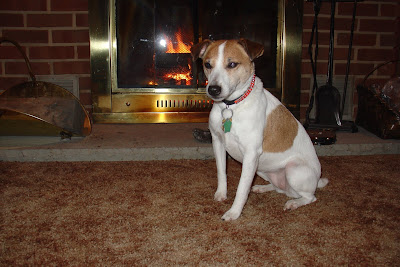 Good mom, good dog. Just need to rest up and get better myself...