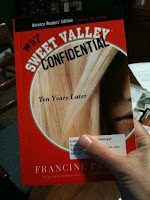 You'll notice that the picture used for this post isn't the usual plain cover image that I'd usually use for a book. I've taken a picture of my copy of Sweet Valley Confidential: Ten Years Later

because I think the level of security being put around preview copies of this book is just silly.

I started reading Sweet Valley Twins, which were about the girls in middle school, while I was a tween and quickly jumped up to the high school series. I remember the first time I read a book in a day. I started with the latest Wakefield twins adventure on the beach, and finished as my mom was cooking dinner that night.

I could do that because these books aren't heavy. They were brain candy. I'd switch between Sweet Valley and Edgar Allen Poe. I do the same thing today, as evidence by the occasional Nora Roberts novel thrown in among whatever else I read and review here.

So I was jazzed to hear that a new Sweet Valley book was coming out, dropping in on the twins when they were 27.

A lot of women my age are excited for the series, too. Apparently the publisher thinks that so many are ravinous for this book, which will be published on March 29, 2010.

This is to prevent reviewers from selling copies on eBay. That's my guess.

I understand that there's a demand for this book, but...c'mon. It's not the next Harry Potter. It's the next installment of a silly melodrama.

I can't say too much about the actual book because of that assignment, though I will say that I wish they'd given this reboot a chance as another series instead of stuffing updates about every single Sweet Valley High classmate into one book. Part of me likes the twins better when they're stuck in the '80s. The "perfect size six" was taken out - I guess they didn't want to tackle the issue that they'd have to be "perfect size zeros" these days. A howl went up on the internet when all those "perfect size six" lines were changed to "perfect size four" in 2008 for new editions of the books.

Yes, there is a curiosity about the new book, but I don't think the book needs this level of security. But maybe I'm underestimating the rabidness of Sweet Valley fans.