May 18, 2011
As you probably know from reading this blog, I'm a freelance journalist, and sometimes I write about books. For the last year or so, I've been reviewing books for American Way magazine, and I can't review those books right after reading them because of my contract.

But now that these two stories are out, I thought you might be interested to see how two assignments from the same book came about.

In September, I get a slew of catalogs from publishers, showcasing what books will be coming out in the next season. After I think most of them have hit my mailbox, I sit down with sticky notes and a pen, and start marking what books I might want for what magazines.

"American Way," I marked on the sticky, and requested the book. I pitched it to my editor who said yes. I then proceeded to read all 660+ pages of the book.

The assignment was only 125 words. I was getting paid in accordance to a short piece. Why slog through the entire book?

Of course, because that's what I'm supposed to do. It's what any decent journalist would do. I knew how long the book was before I pitched the review. It wouldn't be write to do a review without reading what you're reviewing, even if it is over 600 pages long.

One theme kept popping up: Running. Palin is a big runner. Not in the "do 52 marathons in 52 weeks way," but in the running-to-clear-the-mind way. I sent his publicist a note asking her if he still ran. He did, she said.

In November, I pitched a story to Runner's World for their "I'm a Runner" column, which runs at the back of every issue.

I'd been trying to break into Runner's World for three years. I even wrote for Bicycling already, which is owned by the same company - and I don't own a bike! 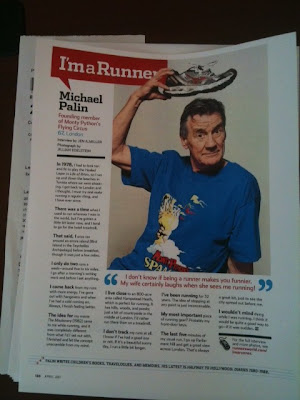 The article ran in the April issue, with an extended Q&A online.

And in the June issue, I saw this: 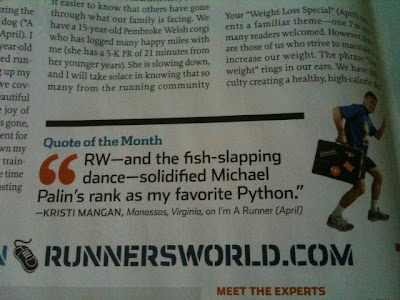 And here's the American Way piece.

From reading one book for one small assignment, I ended up writing another big assignment, and I'm currently working on my third piece for Runner's World. And I got to talk to Michael Palin! Yes, that Michael Palin!

On Tuesday, I'm going to Book Expo America for two reasons: first, to sign copies of my new book. Second, to find new books to write about for magazines. And the cycle starts all over again.