Book 3 of 52: Wildwood by Colin Meloy 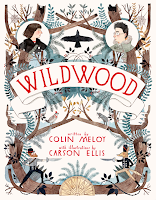 When I found Wildwood

by Colin Meloy staring at me from a shelf at Kramer Books in Washington, DC, I had two thoughts:

1. This has nothing to do with the Wildwood I write about.
2. The Decemberists guy?

Despite my aversion to Colin Meloy's band - and especially his voice - I gave it a shot anyway. I read Strathmere's Bride, another book that had nothing to do with a Jersey Shore town I cover. I should probably also read the best selling one about a different town.

Wildwood is about Prue McKeel a Portland kid (of course) whose baby brother Mac is stolen by a murder of crows. They take him into the Impassible Wilderness, where people shouldn't be able to go. But Prue can't let birds take her brother away, especially when she was watching him at the time of the kidnapping, so rides her bike with a Radio Flyer wagon still attached into the woods, followed by a classmate, Curtis, who tags along despite her telling him to stay home.

It has all the elements of recent popular YA serials: an epic adventure, an alternative world the protagonist didn't know existed, fantastical characters. Animals here talk, and coyotes are soldiers. Some birds will give you a ride. Like Harry Potter, the book seems to come to a conclusion at the end of the book, but the door is left open to future adventures - Under Wildwood

, the second book in the Wildwood Chronicles, was published in September. It's all a bit twee, too: Portland, pea coats, granola bars, gorp. But given Maloy's history, it could have been a lot worse (though he did, technically, put a bird on it).

I feel the same way about this as I did the Lemony Snicket's A Series of Unfortunate Events: interesting, but I'm not rushing out to by the next book as I did with Harry Potter. I first read The Bad Beginning

, the first Lemony Snicket book, while waiting to pick up my copy of Harry Potter and the Goblet of Fire

. The line was so long that I left and ended up buying a copy in a 24-hour Pathmark grocery store. Wildwood is good, but I won't wait to pick up the next book in the series at midnight.