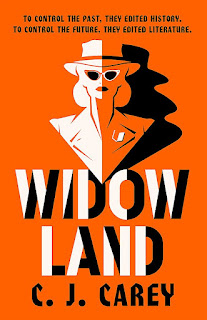 Editor's Note (2/22/23): Earlier this week, I learned that the author of this book is transphobic. I've written more about that here.
In 1937, the Duke and Duchess of Windsor had a private meeting with Hitler at his home in the Bavarian Alps. This was a year after the former King Edward VIII abdicated the throne in order to marry American divorcee Wallace Simpson (hence the lower Duke title).

What happened at this meeting is still a mystery. However, what is known is that the Duke of Windsor was a Nazi sympathizer, and that the Nazis also devised a plan called where Germany would take over Britain and make Duke king again, in exchange for "peace." In 1940, the Nazis launched "Operation Willi," with plans to kidnap the Duke and convince him of this pact (you might know some of this if you watched The Crown. I yelled "oh these two knobs" when Edward and Wallace came onto screen).

Operation Willi failed. Widowland by C.J. Carey asks this: what if it had succeeded?

As you can imagine, nothing good! This "what if..." picks up in 1953. England is subjugated under Germany, with all of its resources (including manpower - and I do mean man) sent to the mainland to create Hitler's sick glittering utopia. Women, who outnumber men two to one, are sorted into a caste system, with Gelis (so named after Hitler's half-niece, whose 1931 suicide was covered up) at the top to serve as company and broodmares for S.S. men, and Friedas, women who haven't and can't produce children and thus have no purpose, at the bottom.

Remembering the before times is discouraged. Everyone is watched and encouraged to report on everyone else. Dissidents are shot on the street, or "vanished," as was King George VI and his family (including, in our world, Elizabeth, the future queen of England). Books that somehow aren't labeled degenerate, like Jane Eyre and Pride and Prejudice, are edited to match Nazi ideals.

That's where our main character, Rose Ransom, comes in. She is a Geli who is tasked with editing great works of literature into another prong of the propaganda machine, meant to pacify those deemed worthy to live into compliance, and into silence.

It's an interesting turn for Jane Thynne, a journalist who is writing as C.J. Carey here. She is most known for her Clara Vine series, about a half English, half German actress living in Berlin in the 1930s, and who is also a British spy. I picked up The Scent of Secrets, the second book in the series, while browsing the stacks and stacks and stacks at Powell's when I visited Portland, Ore. in 2016. I admit I bought it based on its cover, but I enjoyed it, and have read every other book in the series.

One of the things I liked about the Clara Vine series is that it shows the incremental changes happening in Germany leading up to World War II, and how a lot of people brushed off both Hitler and the rumors of what was he really doing - the whole slowly boiling a frog alive thing. Hitler didn't just flip a switch put the country under an authoritarian rule. It was hard not to see the similarities of what was happening in American during the Trump administration (Trump was elected about a month after my Portland visit). Reading Widowland now, one year after the insurrection, as the American right continues to push the Big Lie, and are changing voting laws and voting maps to try to ensure minority rule for what would be the rest of my lifetime and beyond, is jarring. Oh and there's that whole banning books thing.

But that's what good books are supposed to do, right? Jar you. Which is why in Widowland's reality, literature is being erased so as to not waken up the masses.

This isn't the first book to try an alternate history anchored in World War II. Philip Roth's The Plot Against America supposes that Franklin D. Roosevelt lost the 1940 election to Charles Lindberg, who was also a Nazi sympathizer. In Philip K. Dick's The Man in the High Castle, Germany and Japan win World War II. Both of these books were turned into television shows, but I just don't need to inject this stuff into my brain via all my senses. (However, I do recommend the Apple TV+ series For All Mankind, which flips history with Russia getting a man to the moon before the U.S. It's fascinating and gripping, and I can't understand why more people aren't watching this show. Y'all got this channel to watch Ted Lasso right? Give this a try too).

If you don't know much about the run up to World War II, you might be surprised to see some of the names here that fall onto the Nazi side, including Coco Chanel and Joseph P. Kennedy, Sr., father to John F. Kennedy. And of course the Mitford Sisters show up, as they do in just about any piece of literature (fiction or not) that I've read about this time.

I don't think you need to know all this in order to understand the book, but I've included some recommended reading below if you'd like to dive in.

Widowland was published in the U.K. in June 2021, and will be published in the U.S. in August of this year. I had no idea I'd bought a U.K. copy until I started writing this post and realized it wasn't showing up in Bookshop.org. Whoops!

So if you're in the U.S., you'll have to put this on your "to be read" list, or accidentally buy a U.K. copy like I did (the rest of the links are to Bookshop.org affiliate links).

For further reading (I've read all of these, I'm not just pulling random titles):