Book 3 of 52: Saving Fish from Drowning by Amy Tan 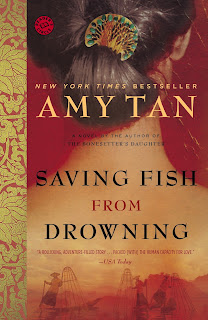 Twelve people go into the jungle to follow a trip planned for them by a friend who recently died under mysterious circumstances. Eleven of those people go missing, their guide found knocked out with no memory, close to where they disappeared. The twelfth member of the group, who stayed behind, tries to piece together where they went and eventually how to alert American authorities. Except the jungle they're in is in Myanmar/Burma. And where the one left behind is at? There is no phone.

This may sound like a tense thriller, but instead, Amy Tan's Saving Fish From Drowning is a comedy of errors, told in the setting of an authoritarian regime, by the ghost of Bibi Chen, the dead friend who planned the trip. Even she doesn't know how she died, but she does know what lies in the hearts and minds of the characters of the story, which isn't always - of course - what they say out loud. The book is about government oppression, displacement, mysticism, colonialism, tourism and, because why not, reality TV. It was published in 2005, five years after Survivor debuted. This early send up still works.

The only disappointing part is the author's note, which comes before the novel.  Tan writes at length about how she came up with this idea: she got caught in a storm in New York City, and ducked into the American Association for Psychial Research to take cover. There she stumbled upon information on "Automatic Writing," writing that is "reportedly transmitted to people who had no knowledge of the received language." And lo and behind, there was information on a medium who was said to channel Bibi Chen, someone Tan knew, and those writings served as inspiration for the novel.

Tan then said in a Q&A that she made it up. Which - fine. By the time the group is separated, the story veers too far from reality to even remotely inspired by true events. But if something is supposed to be part of the novel, it shouldn't be set aside with "a note to the reader" - a lengthy one at the start of the book, no less. Because if you read a lot, you have expectations for what that means. It's something the author wanted you to know, not part of the fiction.

It's a small quibble though. I almost didn't bring this one on vacation because it's nearly 500 pages, and I didn't like the idea of carrying around a book that big in my backpack. But the story flew by. Tan managed to balance the plot's progression with the internal lives of the 12 tourists, plus the guide, the tribe who leads them astray, their drunk hotel host - and on and on. I finished it while sitting by a pool in Key West with a rooster checking in on my progress.

I'm writing this after a long day of driving, swimming, and walking around Key West. It's my third time here, and it just feels different now that I don't binge drink anymore, hence why I'm in my hotel room writing a book blog post at 8:40pm (though I did have a fine margarita at the Green Parrot after the beach today).

I drove here from New Jersey, making stops along the way. One was to Daytona Beach, where I visited Connie's Bookshelf, a small but wonderful used bookstore with a sizable romance section. 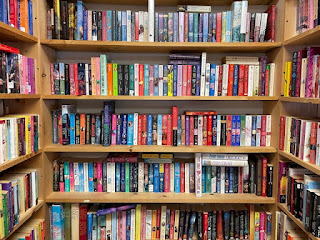 I sourced materials for a Washington Post piece I wrote about romance novels here in 2018 when I spent a month in Daytona, and I picked up a few more this time. So yes there will be romance as part of the Book a Week with Jen series - probably soon. What fun.