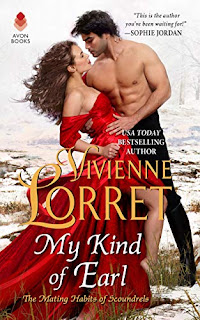 Last year, I did a friend a favor and in turn she gave me some romance novels by authors I'd never read of before. I like regency romance (the era you see in Bridgerton, which is based on the also popular romance series that I read early during COVID). So when I saw My Kind of Earl by Vivienne Lorret in the pile, I said sure why not. I picked it last week for a practical reason: I was traveling to New York City to run the NYC Half Marathon and wanted a book I could fit in my purse.

And...it's fine! It's about Jane Pickerington, an inquisitive single aristocratic woman working on a book about scoundrels. She meets Raven (yes just Raven) in a brothel because she snuck in for research.

As you might imagine, they fall in love. Of course there are twists and turns along the way, including but not limited to Raven, an orphan, realizing that he may be the long lost grandson of an aristocrat and hence eligible to join "society." That would make him a candidate for husband for Jane.......or does it?

The book is solid, but not quite for me. I don't like the virgin/guy who goes to brothels trope, and I'm not a huge fan of very descriptive writing as that's not how I write myself (though I did appreciate an orgasm described as "she shattered like a firework in the night sky.")

But it's what a lot of people like, so if that's you, and you like romance, give it a go. Lorret calls it her Tarzan book, and that makes sense? I'm not sure why they're barefoot in the snow on the cover though.