Book 17 of 52: The Vanishing Half by Brit Bennett 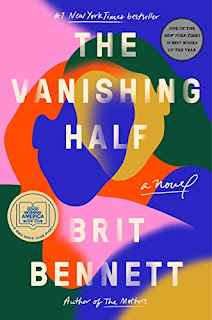 The Vanishing Half by Brit Bennett is one of those books I knew about, but hadn't gotten around to reading yet. It received so much coverage (well deserved!) and won so many awards (also deserved!) and figured I'd get around to it eventually, which I did when I recently found a copy in a Little Free Library near my house.

Of course, it's as good as everyone said, the story of Desiree and Stella Vignes, identical twin sisters growing up in Mallard, Louisiana, a community where light skin is valued, in the 1950s and 1960s. When they're sixteen and their mother pulls them out of school to work, they run away to New Orleans instead. Their stories split when they do, because Stella leaves to start a new life passing as a while woman.

I'm obviously not qualified to write about the racial issues of the book (and I know "issues" itself is not a strong enough word). Instead, I'll point you to this Vox Q&A with Alisha Gaines, author of Black for a Day: White Fantasies of Race and Ethnicity. Also, I appreciated an interview Bennett did with The Los Angeles Times about where the idea for the book, and the town of Mallard itself, came from (it's fictional but based on real places).

I can say that it's remarkably written novel about how one small lie (Stella passes as white to get a better paying job) turns into a secret that metastasizes through Stella of course, but also lives of the Black family she left behind, and the "white" one she builds.

If this is something that interests you, of course read The Vanishing Half. But I also highly recommend the Family Secrets podcast, hosted by Dani Shapiro, who also examined one secret in her own life (that her father was not her father) in her memoir Inheritance. The book but especially the podcast explore what keeping secrets does to the holder of the secret and who is affected by the hiding, and how most people either already really know about the secret or at least that something isn't quite right. Hayley Mills also writes about this in her memoir, Forever Young, and how the secret of her mother's alcoholism affected her whole family (I listened to Inheritance and Forever Young as audiobooks - I recommend them both).

As usual, I got off the topic (a review of the book) and into something else (family secrets). I almost went into a tangent about how I usually find the "hit book of a year" a few years later at library book sales, and what happened to those during Pandemic Year 1? But I restrained myself. Maybe I go down that path when I have to do a post about a book I didn't like and want to write about something else. But I find it all so fascinating! Which is probably why I wandered this way. I hope you enjoyed wandering with me too.