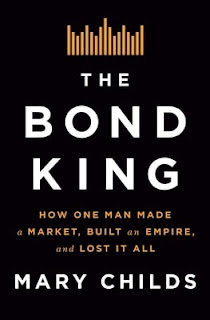 I have a friend who likes to say that money is fake. Some sums are so big that they don't feel tethered to reality. Can you envision what a million dollars looks like? A billion? A trillion? Money is fake!

I kept muttering "money is fake!" while listening to The Bond King by Mary Childs, which is about Bill Gross, founder of investing giant PIMCO. Childs starts with him leaving the firm and the shock it sent through the financial world. She then meticulously shows how he gained his fortunate and his Bond King title, and then how he lost the firm he created, to the point that I'm not sure why it wasn't obvious to everyone that there was much strife in the house of PIMCO before he left.

Childs has had a long career in financial journalism and is now a co-host and correspondent on the NPR podcast Planet Money, which I listen to often, and is how I learned about her book. I had heard about Gross back when I was a living through and reporting on the Great Recession, but my focus was on personal finance and how people like myself could get through it, not on the big players in the whole debacle. It's hard to look at the bigger factors when you're trying to figure out how to afford to keep your home that is worth much less than what you paid for it (as I was doing), and how to help people facing the same problems or worse (as I was doing). But Gross saw the housing crash coming. He made a lot of money off it, and possibly even spurred it on, as Childs and Rick Mulvey of Motley Fool discussed.

I've said before that I like to listen to books that I might not sit down to read in physical form, which is why I opted for the audiobook here. I admit that I sometimes mentally clicked out of the narrative of who was mad at whom, how someone was trying to undercut another, etc. But that's OK. I learned a lot anyway, and got the overall feeling that large chunks of the financial world are one big game for a small group of mostly old white rich men who will still be rich if things go wrong, pensioners or homeowners or anyone else be damned. It's depressing.

But still, The Bond King book unwinds this story well, even if Childs faced flack for writing it. In the author's note, she said that it took her so long to write the book that rumors spread that she'd been paid $10 million to kill the project. Also, Gross' former business partner Mohamed El-Erian, who declined to speak to Childs, somehow got an unauthorized copy of the book before publication and had his lawyer send a list of problems he saw with her reporting (which she added to the book). That's some spy stuff!

Childs did a pretty great job narrating the book but she had the same slight blip as Jacob Goldstein does in his also very good Money: The True Story of a Made-Up Thing (see, money is fake!) They read their books like it's a podcast, not a non-fiction book. They're two different things, especially where in an audiobook they have to act out the quotes of different people versus interviewing them on tape as they would for Planet Money. I don't know how they'd learn to do that, and I'd have been disappointed if audio journalists weren't reading their own books!

It's a small thing, but since I am dutifully reporting my experience with the book, I wanted to make that note.