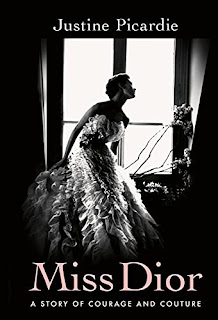 I'm sure most people reading this book know Dior: the name, the brand, the fashion, the perfume, etc. But that's not what Miss Dior: A Story of Courage and Couture by Justine Picardie is about.

After writing a biography about Coco Chanel, she considering doing one of Christian Dior. Instead, Picardie became much more interested in his sister Catherine. While Christian's creations have captured the hearts and imaginations of generations of people (including myself - I nearly wept when I saw the Bar Suit in December at the now closed Brooklyn Museum's "Christian Dior: Designer of Dreams" exhibit, which is also where I found this book), Catherine was a true hero. A member of the French Resistance, she was caught, tortured, and imprisoned at the Ravensbrück concentration camp, where the Nazis murdered at least 50,000 women.

Picardie's challenge was that very little is know about Catherine beyond the facts: birth and death dates, position within the resistance, when she was imprisoned, when she was released, and that she was an avid gardener (she worked as a florist after the war). Beyond testifying at the trials of her captors and torturers, she did not talk much about what happened. Picardie couldn't mine correspondence, personal journals or a wartime memoir. "The dictionary of Catherine Dior would not have many words within it," Laurent des Charbonneries, the grandson of Catherine's partner Hervé, told her.

Instead, Picardie builds the book around what other people said and wrote about Catherine; guesses of where she might have fit in during her brother's post-war rise to success and fame; and the experiences of fellow members of the French Resistance and prisoners at Ravensbrück.

Miss Dior is the ultimate write around, not because the subject is dead or didn't want to talk to the author, but because she seemed to have wanted to fade as much into the background rather than talk about her trauma. Which was her right of course. But she died in 2008, and I'm glad Picardie took on this challenge, even if I sometimes lost track of the fact that she was supposed to be writing about one person rather than telling a story of an era. This was especially the case of the chapters about concentration camp life, and the abject horror that Catherine and those with her faced - as told by others.

If you're looking at Miss Dior and wondering why it's a $40 book, it's because it includes hundreds of photographs and illustrations, which is appropriate given that it addresses both the horrors of war, and the lush and luxurious fashion that came after. It has pencil drawings of prisoners at Ravensbruck in one section; a picture of a model in the 1949 "Miss Dior" dress in another. One came after the other for a reason, as Picardie links in the book, and through Catherine. It's also printed on nicer paper that I'm used to for a biography. It smells like a textbook.

My only quibble is that Picardie sometimes digs too far into her experiences while writing the book. It's nice that she got to work on parts of Miss Dior in Christian and Cathrine's homes, and she was allowed to view some of the dresses from Dior's archives, but I didn't need to know the details of Picardie imagining their ghosts around her, for example.

One note: when researching Picardie, I came across this 2011 New York Times article about three Chanel biographies a batch of Coco Chanel biographies that came out at the same time, and the war of words among the authors, which I found fun (though I'm sure the authors themselves did not). I've already read Hal Vaughan's Sleeping with the Enemy. He takes the stance that Chanel was pretty much a Nazi given her relationship with a Nazi spy, and some actions she took during the war. I haven't read Picardie's Coco Chanel: The Legend and the Life, but of course Chanel comes up in her Dior book. Her take is that Chanel was a collaborator, like a lot of French citizens, and got away with it, like a lot of French citizens.

Well, maybe two notes: I also recommend a great albeit short lived show called The Collection on Amazon Prime that is a fictional take on all this, which I wrote about for Racked (which is now Vox's The Goods).