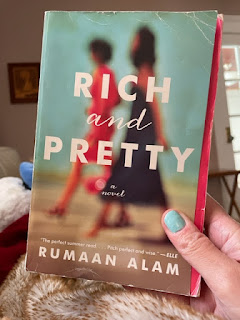 Sarah and Lauren have been best friends since they were 11 years old, even though that friendship started with a chip in it. Sarah is rich and goes to the pricey New York City private school because that's what people with that much money do. Lauren goes because her mother works for a doctor who tells her about it, and that Lauren could go there on scholarship.

What happens from there is the crux of Rich and Pretty by Rumaan Alam, with the story told around the planning of Sarah's wedding. It's about friendship and how sometimes we hang on too long to people just because they've always been there (during one of their many tiffs, Lauren asks: "Is this friendship or is this a force of habit?")

That can be interesting, but I found this book dull. Sarah and Lauren float through New York City life, they make up, they fight, they come back together again, but nothing really happens except they get older and gradually steer into becoming the people they said they would never be.

I had the same problem with this book that I had with Sally Rooney's Normal People: neither one of the protagonists is particularly likable, and they don't do anything. What the are these books about?

I know that my opinion that Rooney's book read like a bad college writing project is not a popular one, and Rich and Pretty was also well reviewed. Maybe Rich and Pretty hits a different spot if you're a New Yorker or know New York types. I've seen a zillion Sarahs and Laurens on my trips to New York for work, but I don't live there. Except for a brief window where I considered moving to Brooklyn, I never wanted to be one of them. I just didn't get the appeal. And I don't about this book either.

This is the first title I truly didn't like on this go-round of the blog. But as I wrote here in 2013, I still sometimes continue on with a not perfect book if it's a highly anticipated, or there's something to learn from it. The "women of New York" genre is a pretty big one. Rich and Pretty just isn't my favorite entry into it.

Nail polish: Gelato on My Mind by OPI