Book 25 of 52: Italian Neighbours: An Englishman in Verona by Tim Parks 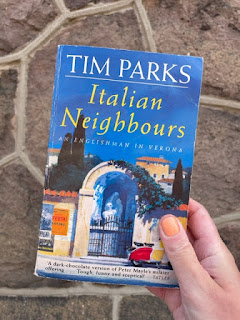 How about a little travel to kick off the summer?

I've been sticking to domestic trips lately for obvious reasons, but I'm hoping to go back to Italy in 2023 or 2024. I like it there. I've been twice, once to the Tuscany region, and another time to Rome with a jaunt to Capri, where I had sandals made for me, haggled in bad French with an Italian shopkeeper over a vintage Louis Vuitton bag, and bluffed my way into a nightclub that wanted me to pay a 40 Euro cover charge.

I've also been doing a genealogy project and looking into my Italian roots (yes, really, don't mind my last name), which was partly inspired by a trip to Ellis Island in December. I saw where my great great grandparents, Salvatore and Giuseppina, came into this country and, for better or for worse, you're all now stuck with me - for now.

Who couldn't use escaping into another world, even if it's just through a book?

Tim Parks, a writer, teacher and translator, moved to Italy with his wife in 1981, settling in the Via Colombare in Verona. Italian Neighbours: An Englishman in Verona is a series of essays about their first year there. It's very much a fish out of water story, which he wrote 10 years into his residency in that pond.

Like any good "I'm not from here so here's what I saw" commentary, he finds the extraordinary in their ordinary, like the pervasiveness of the Virgin Mary:

"At the entrance of the maternity ward a little waiting area is heaped with flowers and there is a small white statue of the Madonna. One gets to rely on her after a while: that simple passivity, absorbing all, at crossroads, hospital wards, cemeteries. Although sometime, through her very ubiquitousness, the quiescent figure becomes not so much a protecting presence as a reminder that, whatever happens, all will go on before."

Even though I'm not longer a practicing Catholic, she's always been in my life as well. As a second or third generation Italian American (depending on who you ask - Italy considered my grandfather an Italian citizen, no matter where he was born), I grew up with her everywhere - including on top of my dresser, and find comfort in her, which I wrote about for the Washington Post. Even though Parks is British and not Catholic, he could recognize that too.

Sometimes Parks is crude, especially when describing his older neighbors, and about what he'd like to do to an incessantly barking dog. He tends to simplify some folks as if they were characters instead of people, but it wasn't startling to see in a book published in 1992. He's also moved up from being the struggling writer he was at the time this book is set: he's written more than a dozen books and his novel Europa was shortlisted for the Booker Prize. He also writes often for the New York Review of Books.

I ordered my copy of Italian Neighbours through eBay, and it's seemed to have been on a trip itself: it has a UK price printed on the back (and indeed the UK spelling of "neighbours") but that price is covered with a sticker showing how much it cost in Canadian dollars.

If you're curious about this one, Parks has also published an excerpt on his website - along with some thoughts on writing the book - which you can check out here.

Oh and speaking of genealogy projects: no one's name was changed at Ellis Island. Ever. Salvatore and Giuseppina might have come to be known as Sam and Josephine, and their son/my grandfather Antonio as Anthony, but their names weren't changed upon entry.