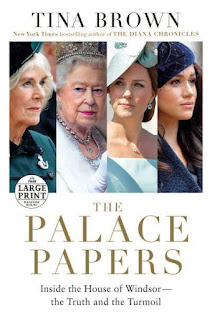 I'm not going to write a long review of Tina Brown's The Palace Papers: Inside the House of Windsor — the Truth and the Turmoil for two reasons. First, it's been hashed to death already, as anything about the royals is, by people who are far more invested in this whole thing than I am. And second, I'm in the frantic "do I really need a jean jacket AND a windbreaker" level of packing before a long trip.

I can say that I didn't mind listening to this nearly 18 hour audiobook while the rest of the world is on fire, although of course they are not insulated. We can pretend that the Royal Family lives in a bubble, but they are enormously influential; touched by the same issues of race, class and gender; and Queen Elizabeth II is one of most influential politicians of modern times — and she is a politician, no matter what anyone says. Her death will be a global, cultural moment. Same thing with the Pope, on both fronts.

I listened to Brown's The Diana Chronicles in 2019, on a road trip. I said then that it felt icky about the whole thing, so much so that I couldn't stomach the most recent season of The Crown. I didn't have that feeling this time around because the gossip was equally distributed. Despite the cover depicting only women, which I assume was done to draw in readers, this book focuses on all the current players. The part I enjoyed most was her tear down of Prince Andrew, who deserves every single thing horrible that has come his way.

Brown seems relatively neutral on everyone else, though her view that Kate Middleton and Meghan Markle are both social climbers seems less then fair, and a bit of a stretch. Then again, Brown also said that Middleton did "the perfect thing" in having a baby boy first, as if she could control that.

It's gossipy, but also meticulously sourced and researched. You can't say that about most coverage of the Royal Family.