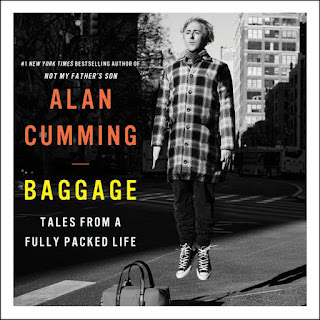 I'm a big fan of taking long road trips. Since I flew to Texas to buy my 2002 Jeep Wrangler TJ and drove it home to New Jersey without really knowing how to drive stick - and didn't die in the process - I've found the appeal of taking a very long drive.
But those long drives are often boring. Music alone doesn't cut it for me, and NPR repeats itself after a while. In 2014, when I took that long Texas drive home, we didn't have as many podcasts as we do now. So before my flight, I went to my library and checked out a "book on tape," which was then a CD.
I was so intensely focused on trying to drive a new to me car in a new to me way that I didn't think I could concentrate on whatever the book was about (something historical, probably about English royalty). So I opted for whatever I could find on the radio to accompany me through my white knuckle driving.
By the time I took a road trip to Asheville, N.C. a year later, I could (mostly) drive the car, and I'd also learned that I could check out audiobooks via a library app and play them through my phone. Game changer.
This is a very long windup to say that Alan Cumming's 2014 memoir, Not My Father's Son, was the very first audiobook I read to that way (and yes, it's reading, none of that ableist nonsense here). Listening to him read his own book, in a Scottish accent I never knew he had, was ear opening about the possibilities of audiobooks in this format.
It was so much easier than using a CD that sometimes got stuck in my car's old sound system, or checking out a brown plastic box of tapes, as I'd done as a teenager at the regional branch of our county library, to shove into a Walkman to hopefully drown out the noises of the other five people in the van on whatever drive we were taking. Overdrive, which became the Libby app, lowered the barrier to getting into this very important book form.
I checked out Not My Father's Son expecting a dishy show business book, but it's about Cumming's childhood growing up in an abusive household. I cried on the drive while listening to it. What a harrowing tale, as told by the actor himself. "Celebrities reading their own memoirs" has become one of my favorite audiobook genres.
Cumming's new memoir, Baggage: Tales from a Fully Packed Life, is more what I expected going into Not My Father's Son. The events of this book are sandwiched between the breakdown of his first marriage and the formation of his second. He writes about being a Scottish actor taught to hide where he's from in order to make it in British entertainment; winning a Tony; how much he loved doing movies like Spice World, Josie and the Pussycats and Spy Kids; his sexuality (he's bisexual - first marriage was to a woman, second to a man) and how he chooses roles.
After the tense experience making X2: X-Men United (which is a part of the book all the entertainment sites covered), he made up a "bank" system. He makes deposits into the bank by doing big Hollywood projects, which in turn allows him to make withdrawals when he wanted to do less commercial but more personally fulfilling work.
Right after I finished the book, the trailer for My Old School dropped, where Cumming acts the role of Brandon Lee, a huckster, in a documentary by lip synching to Lee's recorded audio interview. It's weird - you have to see it. He's also in Vancouver filming the second second of Schmigadoon! which I loved. Are these deposits? Withdrawals? Both? Who cares, I'm glad he's happy. It's an interesting way to think about creative work, and funding it.
The memoirs are very different, and excellent in their own ways. It seems he left the door open to a third one because of where he stops this book. If so, I'll be listening.
(And if your audiobook habit grows, as mine has, I also recommend Libro.fm. I haven't completely de-Amazoned my life, but going there for audiobooks instead of Audible [which sometimes gets authors into contracts where their audiobooks can't be heard on any other platform] is a good step that also supports independent bookstores).
Like this post? Buy Jen a cup of coffee.