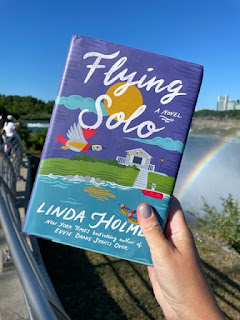 I'm a subscriber to a local weekly newspaper, and I always make sure to read the death notices. I'm nosey, but I also look to see if the parents of someone I knew in high school - or, sadly, sometimes a classmate themselves - has passed on.

Unlike obituaries, which are staff written, death notices are submitted and paid for by someone who knew the deceased. Sometimes death notices are pretty rote: born, married, job, died. Other times, they include the person's favorite hobbies, where they traveled, and things they liked to do with the family that is now grieving, information about services, and where you can make a donation in their honor.

The ones that irk me the most those that point out the person wasn't married. Even in death, they're still getting shit from their families for being single.

This is a round about away of getting to Linda Holmes' Flying Solo. It's a novel about Laurie, a Seattle-based freelance journalist who returns to her hometown in Maine to clear out the house of her Great Aunt Dot. Dot never married. Laurie recently called off her wedding. The parallels are obvious.

In clearing out a lifetime of memories, Laurie is reminded of Dot's lead a big, full life. Laurie, we learn as she unravels the mystery of a decoy duck she found buried in a drawer (yes really), is pretty sure that's the kind of way she'd like to proceed too. Duck decoy provenance, and Laurie's own thoughts, become clearer from there.

I liked this book very much. I haven't found many Lauries in commercial women's fiction (which I think is fair to say how the book is marketed) without the idea that she can "still" be fixed if she gets married. In this case, that would be to her recently divorced high school sweetheart, with whom she reconnects on the trip.

Even though I know cis heterosexual women not defaulting to marriage and babies is a normal experience, reading about a 39-year-old-woman who isn't necessarily jazzed about the idea of ditching the life she's built for herself in order to be with someone she dated half a lifetime ago, felt radical, especially at a time when forced birth is once again a thing in this country.

A few quotes I liked:

And, on a personal note:

Why on a personal note? Because Holmes, who I know personally, said she got that information from my writings about how I make it as a freelance writer.

On another personal note: I took that photo at Niagara Falls. Why did I go to Niagara Falls over a holiday weekend? Because why not?

Back to where I started: Right around the time I bought Flying Solo, I read another death notice that picked at a dead person for not being married. I was about to recycle the paper until I saw one about Anna E. Costello, who died on June 12, 2022 at the age of 92. The notice said that "Anna lived a full life on her own terms quietly in her beloved home."

I don't think you can ask for much more than that.