Book 40 of 52: Fun Home: A Family Tragicomedy by Alison Bechdel 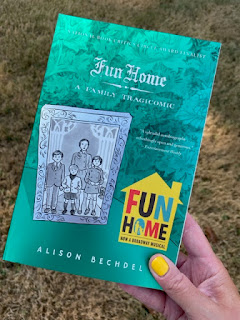 This post starts with a book I haven't read: The Body Keeps the Score: Brain, Mind and the Body in Healing Trauma by Bessel Van Der Kolk, which I bought months ago and kept picking up and put it down. Earlier this month, I finally told myself "You're finally going to read it, damnit." I even painted my nails the same color as the stars on the cover, and took a picture holding the book.

I've been thinking enough about trauma lately and couldn't bring myself, in this exact moment, to read about what it's done to me. We're coming up on the 10th anniversary of Superstorm Sandy, a terrible tragedy I covered and told myself for a long time could not a big deal to me personally since I was safe and I didn't lose my home. I was just the channel through which other shared their despair and anguish, what's the big deal? I grew up in a "brush it off" household. I should have been able to brush that off too.

Spoiler: I did not. And nearly a decade later, a little voice inside my head keeps telling me I am weak because I haven't, even though I know rationally that's not possible. My brain feels weary when I think about learning more about why, so I picked up Fun Home: A Family Tragicomedy by Alison Bechdel instead.

Bechdel too grew up in a "brush it off" family, but also one also steeped in secrets, volatility and, eventually, what she believes is death by suicide when her father was hit by a truck. Did he step in front of it on purpose? She believes so, and in graphic memoir form, unfurls her family's story leading up to that moment, and what happened to her after as she started to emerge from it.

It's a classic, and very good, but heavy. It was also surprising to me because my only experience with the material a clip of "Ring of Keys" from the broadway musical adaptation. I can still see where I was when I heard it: running down Foothills Parkway in Boulder, Colo., where I was staying in August and September 2017 while trying to outrun another trauma. I was routinely waking up in the 3 a.m. to 4 a.m. block then, so instead of tossing and turning, I'd get up to run instead, taking some pleasure in setting out into the dark and running into the day. I'd start in the pitch black as the sky would gradually lighten, and be greeted by prairie dogs in full sunlight on my way back (which was WILD to this east coast gal).

I was listening to a podcast during the still dark part of the run (I tried to identify which podcast it was on, but I can't find it) and heard this song about sexual awakening. My own ignorance is why I was surprised by the heaviness of the book. But it's still a weird memory I wanted to share here because, well, I can.

Anyway. I'm glad I read it. And I will get to The Body Keeps the Score - eventually.

Nail Polish: Exotic Birds Do Not Tweet by OPI.