Book 41 of 52: Unmask Alice: LSD, the Satanic Panic, and the Imposter Behind the World's Most Notorious Diaries by Rick Emerson 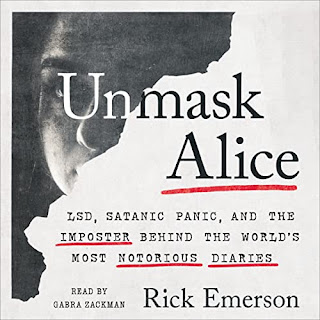 I don't remember how old I was when I read Go Ask Alice by Anonymous, but I do remember where I was. Until I went to college, I spent most of my summers in a campground at the Jersey Shore. My mom would take us to the beach in the morning, then drop us off at the campground pool on the way back and tell us to stay there until dinner. It must have been July or August because the pool was packed, so much so that all the chairs were all taken, and the only place I could sit was my beach chair. That's where I stayed was on a beautiful summer day, enraptured by the "diary" of Alice, a drug addicted teenager.

I hadn't thought about the book in years, until I listened to an episode of the You're Wrong About podcast that featured Rick Emerson, author of the new book Unmask Alice: LSD, Satanic Panic, and the Imposter Behind the World's Most Notorious Diaries. They dissected exactly why the book is implausible, which seems obvious to me now in a way that teenage me, who of course had D.A.R.E. classes at school, couldn't see. None of the drug stuff makes sense, especially that for Alice, almost every other kind of drug becomes the gateway to the hard stuff: marijuana.

Emerson also dug into the story of Beatrice Sparks, the "editor" of Go Ask Alice, who said she was given the diary by Alice herself, and the overall impact of of Go Ask Alice, which has sold more than five million copies and is still in print. During the time I listened to the audiobook of Unmask Alice, I found a physical copy at a Little Free Library near me. It's still out there (though someone picked up this copy last time I checked). 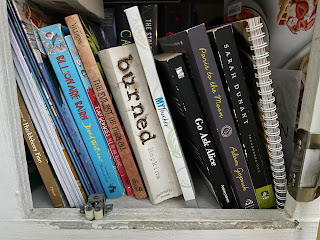 Emerson held back from telling the full story of Sparks on the podcast, and I get why now that I've finished Unmask Alice. I know "jaw dropping" is a cliche, but at points, I was so shocked by the book that my mouth fell open and I said "WHAT?! to an empty room. Notice that the subhead says "diaries," not diary. In many ways, her second big "found" diary is the one that shows how truly exploitative and cruel she was in trying to feed her own ambition, and make up for what she felt was a grave slight in her name not being on the cover of Go Ask Alice. It seems too that this other diary had wider societal implications, even as Go Ask Alice was co-opted by the "War on Drugs."

Because the unraveling of that story is what makes Unmask Alice so compelling, I'm also going to leave it out of this review. It's a wild if depressing ride that I highly recommend taking.