Book 42 of 52: The Man Who Died Twice by Richard Osman 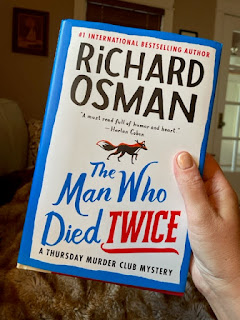 The Man Who Died Twice by Richard Osman is the second in the Thursday Murder Club Mysteries series, which brings together a group of senior citizens from a British retirement village with two local law enforcement officers and assorted neighborhood characters to solve crime. In this one, the ex-husband of Elizabeth, one of the seniors, comes back into her life, asking for her help. Despite her feelings about him (he cheated on her often), she still says yes. And then everything goes to hell.

I don't want to say too much here because details about Elizabeth, her ex-husband or the fellow seniors would be major spoilers for the first book, The Thursday Murder Club (which gave the series its name), which you should probably read first. You could do without it, but you might be confused. I read The Thursday Murder Club last summer and had to refresh my memory as I got into this one.

It's not as much a cozy mystery a la the Murder, She Wrote books, but more along the lines of the TV show Only Murders in the Building in terms absurdity, violence and body count. They also share the same vibe of inter-generational teamwork. Just like the Steve Martin and Martin Short characters, the seniors in the Thursday Murder Club have lived full, robust lives, and still have a lot left to give, which in these books, is chasing down drug dealers, mafia members and...well. You can read on to find out yourself.

Nail Polish: Mimosas for Mrs. & Mrs. by OPI with Sequin Sash by Essie for top coat.