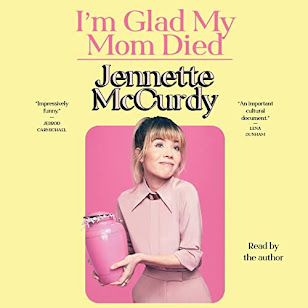 I listened to the audiobook of Jennette McCurdy's I'm Glad My Mom Died while packing for and then starting my road trip to the national parks of Minnesota and Michigan, and often had to stop the recording to process what I'd just heard.
It is one of the most harrowing celebrity memoirs I've ever read. It comes with every kind of content warning you could imagine. I'm going to share some of what she wrote about here, so if you need to click out of this one, I completely understand.

McCurdy was a child star pushed into show business by her mother, an abusive narcissist who taught her daughter how to be anorexic, did "exams" on her into her late teens, didn't let McCurdy shower herself (and often showered her together with her teenage brother), and didn't even let her wipe herself after she went to the bathroom until she was at least eight years old (she describes the behavior at that age but if she said when it ended, I didn't catch it).

The book is about that life, and also what her mother pushed her into: a role in the Nickelodeon show iCarly, whose producer, Dan Schneider, has been accused of inappropriate touching, trying to get underage actors drunk, and using abuse to manipulate children and teen actors into doing whatever he wanted.

In the book, McCurdy calls him "the producer" though it's obvious who he is. Since the memoir came out, other former Nickelodeon stars have come forward with their own stories of how he treated them. McCurdy also wrote that after cancelling iCarly spin off Sam & Cat, Nickelodeon offered her $300,000 if she'd never talk about her experiences there (which she obviously didn't take).

Some of the show business stuff has already been rehashed in stand alone articles, especially what she said about her time on Sam and Cat, where she co-starred with Arianna Grande. In the book, it seemed more the complaints of a person who was stuck in a job she didn't want, where she was treated poorly, while also going through hell in her personal life, than complaints about Grande — though that's not going to get the most clicks. The book is about so much more than that. It's the most blunt recounting of what it's like being raised and abused by a narcissist I've ever read. On a style note, it's also one of the few books told in present tense that, for me, worked.

I'm Glad My Mom Died is "the hit no one was ready for," according to The Wall Street Journal, and it's been hard to find copies (not with a digital audiobook, obviously). It seems a result of, once again, a business underestimating teen fandom. iCarly was immensely popular and on for six seasons. Those fans are now adults, with buying power. I'm not surprised at all they wanted to read about what happened to someone they admired, especially in this current climate. Just a year ago The New York Times wrote a piece about Schneider trying to make his comeback. I hope that is dead and done now.

Disclosure 2: I worked with Sean Manning, the editor of this book, at my college newspaper, though I didn't realize it until I heard the acknowledgements at the end.