Remember in my last post when I said I’d read two books at once sometimes because of an assignment? This is one of those times.

, for the piece. I admit that I hadn’t read the book when I wrote her questions — I didn’t even think about interviewing an author, but as I looked over my notes, I saw something was missing. I’d been sent Oren’s book about a year ago (the attached press release is dated November 1, 2007), and in every book purge I’ve done, it survived because I thought she’d make a good source at some point.

Yahtzee. So while waiting to do interviews today or avoiding the two annoying stories I had on my schedule, I’d read a bit here, and a bit there. And after planting my butt in my reading chair for the last hour, I’m finished book 6 of 52.

I’ve said it before about these types of books and I’ll say it again: they are books of common sense — at least decent ones. Whether or not they work usually has to do with your frame of mind. The Four Man Plan is one such book. A year before, I would have thrown it out the window, but I read it at exactly the right time, so it made sense.

will be that book to someone — not so much to me because I’ve dabbled in online dating since 2003, so many of the things Oren said I knew, though I did pick up a few things here and there. I will think again about some of the things I wrote in my profile. I signed up for a free online dating site recently but haven’t pursued it that much. I think I did it more as taking a step in a positive direction than anything else. Online dating can be a lot of work between writing a profile, emailing with potential suitors, and then going on actual dates. And in thinking back to the last few months, maybe I wasn’t in the right frame of mind to be dating anyway. So throwing a profile up on a free site? A good way to test things out.

Either way, online dating can be fun and I think for a lot of us, a viable option. I can’t argue against its success — my father met my step mom and my sister met her boyfriend on match.com. My brother met his fiance on myspace.com (she contacted him, FYI — and this was before myspace.com lost favor). I’ve met some great guys online, some of whom are still friends. One lives with his fiance two blocks from my house and is my sometimes dog walker; I went to the break up party of another one about a month ago, and I see him all the time while I’m running (which leads to the awkward how-do-I-hug-you-when-I’m-sweaty-from-working-out). It’s even funny sometimes when you see profiles of guys you dated. I went on a few dates with men who I sorta knew, but they never knew I was single. Really, just about everyone has tried it.

Of course, I have a few horror stories, too, like the time I got stood up (yes! stood up!) and the date who finished dinner by using his fingers to scoop up ketchup off the table, then licked his fingers.

But of all the methods there are out there to meet people, this at least offers you a screening option, and I don’t feel strange about emailing, well, strangers. I’m a journalist and benefit from the same perspective that Oren does as a publicist. We’re used to reaching out to people. It’s just like meeting for an interview (and, yes, I’ve dated people I’ve interviewed, too, but after the story came out). Well, not exactly like that because dating brings on a whole new bundle of nerves, but the more you do it, the easier it is. If an online date goes bad? Meh. There’s always another one.

But I think you can apply that to all sorts of dating, not just online. I take the train to Rutgers-Camden where I teach two nights a week, and after class last week, I struck up conversation with a guy waiting to go to Philly. He was probably too young for me, but he was worth talking to. It was good practice (though I wish I’d given him at least my name to see if it would have gone anywhere).

The only question mark I have with Fine, I’ll Go Online!: The Hollywood Publicist’s Guide to Successful Internet Dating

is the advice about pictures. She says no way to pictures in bikinis and lingerie, which I agree with 100 percent. But she’s OK with slinky dress pictures. I was thinking about this today because I posted a picture of me at a Christmas party to my facebook profile, and it got a lot of responses: 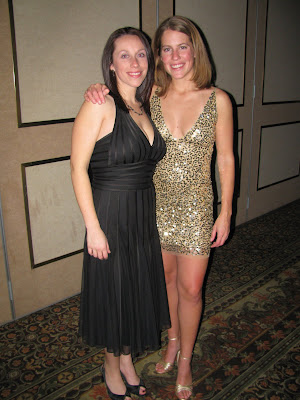 I’m not stupid enough that I don’t know why I got a lot of comments. And as much as I like the picture, I don’t think it’s a good representation of who I am. I don’t even own another article of clothing that has sequins on it. I bought the dress on a lark, and I’m glad I did. I didn’t have a date for this party, but, dammit, I was confidant in going stag, and in what I was wearing. It was a proud single girl — and runner — moment (see?! all those mornings spent running instead of getting over a hangover were worth it!)

ANYWAY: But would this be the best picture to represent who I am 99 percent of the time? Probably not. It’s like the time I met a wonderful guy at a black tie when I was wearing a female tuxedo without a shirt. I got six numbers that night. After our first date, he said he was slightly relieved — he thought I might be different than I am because of what I wore that night (though he readily admitted and STILL admits that the outfit got his attention but my personality reeled him in). I interviewed an editor with lavalife.com who made a good point about being completely honest about who you are in your profile: you want to meet a guy who will like you, not a false version you present (this in a conversation about people who post pictures from 10 years and 30 pounds ago). Is that picture me? Sometimes, but not most of the time.

I dunno. What do you think? Last time I posted a sorta hot picture online, I got a lot of offer for one night stands, and that’s not my thing.

In any case, if you’re thinking about trying online dating or getting back into after a somewhat bad experience, this book is a good primer to help you along.