Book 8 of 52: A Dog Named Christmas by Greg Kincaid 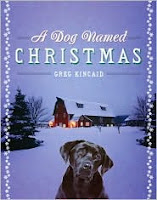 is a short, sweet almost parable about -- you guessed it -- a dog named Christmas. Well, it's more about a farmer named George, a Vietnam vet who has loved dogs but was so hurt by losing them that he refused to keep a dog anymore.

It's George's developmentally challenged son, Todd, who convinces George to give a dog a home for the holidays through the local shelter's "adopt a dog for Christmas" program. A big black lab who's a bit of a wandered wanders into the shelter and then into George's home. Todd names him Christmas since he's a Christmas dog -- and supposed to just stay for the season.

This being a sweet story, you can guess what happens -- not that it's necessarily a bad thing. We all need a bit of sweet in our lives.

It's a book that has "stocking stuffer" written all over it, especially for folks who have adopted dogs. And, no, I'm not going to compare it to Marley & Me because that would be obvious, and I think it's gotten enough press already.

I don't have a dog named Christmas, but I do have a dog named Emily. I adopted her before Christmas three years ago. I still remember bringing her home to my mom's house (I hadn't yet moved into the apartment that would let me have a dog). I don't know why, but I tried to tie her leash to a chair. My mom was worried that Emily would either pee on everything or chew on the chords that lit up the houses in her Christmas in the City collection. Obviously, that didn't work, so I followed Emily around for hours as she sniffed everything in the house (and, no, she didn't pee on anything. She's too dignified for that).

This is the photo I used for my Christmas card that year: 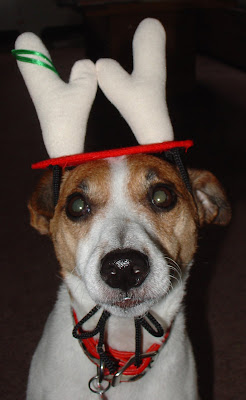 It's amazing how that little bugger wound herself around my heart so quickly -- this is a book for folks who feel the same way about their pups.