Book 9 of 52: Utopia, New Jersey: Travels in the Nearest Eden

I've had Utopia, New Jersey: Travels in the Nearest Eden

by Perdita Buchan for a while now -- I believe for over a year. Before Frank Wilson left the Philadelphia Inquirer as book editor, I picked out a lot of books from the book room, all of them marked with a colored star for what I would believe to be their filing system. This book has a blue one.

I could never quite bring myself to donate the book, even when I'd get rid of just about everything not nailed down in my office book wise. Why? Because of the title. How interesting does a book about New Jersey utopias sound?

And it was interesting to read, if uneven. That's not a knock against Buchan, but some of these utopias were more interesting than others.

Take, for example, the case of Free Acres, a colony set up in 1910 in Berkley Heights. It was a single tax community with a heavy focus on keeping the land as is (with houses in between, of course). How fascinating! Then there's Upton Sinclair's Helicon Home Colony in Englewood that ended when the house literally burned to the ground.

Those are the first two chapters of the book. The rest...well, if I wasn't doing this blog series, I might not have finished the book, or have read it later in pieces, one utopia at a time.

As a whole, though, I learned a lot about the state that I didn't know before, and the book would be a good volume for someone who makes fun of New Jersey to read. I've lived here most of my life, which some would say makes me biased. But I've also explored a lot of areas of the state (i.e. away from the New Jersey Turnpike), and it's achingly beautiful in spots, like Sunset Beach in Cape May: 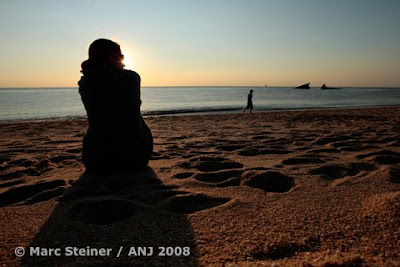 The fact that so many people tried to set up their slices of heaven here is not a surprise (geography also helped, of course). And why else would people flee Philadelphia and New York to head to the shore every summer weekend? There's a lot of beauty to be had here.

LVTfan said…
You might be interested in Arden, Delaware, and Fairhope, Alabama, both single-tax communities started about the same time as Freeacres, and both still in existence.

Henry George's ideas, laid out in "Progress and Poverty" and "Social Problems" (both available online), still have a great deal to offer today, and I commend them to your attention.

I've come 'round to late my grandparents' point of view: that these ideas offer our best chance of solving serious problems we generally consider intractable.
January 3, 2009 at 4:41 PM

Teresa said…
Sounds like a definitely good read for those that make fun of NJ. Being originally from MD, I hadn't spent much time in NJ before moving to Philly for college. And now that I'm blessed with in-laws that are gracious enough to share their NJ shore house, I've learned to love NJ; the shore towns at least. And the great fresh produce you can find on the way to the shore points can't be beat. My husband & I were married on the beach in Cape May 5 yrs ago, and I just think of the NJ shore as a little slice of heaven on Earth.
January 6, 2009 at 11:28 AM

Mary Lois said…
Buchan's book inspired me to work on mine about Fairhope, Alabama--which has since been published. You might be interested in it. For reviews, including one by Perdita Buchan, check here or the listing for The Fair Hope of Heaven on amazon.com