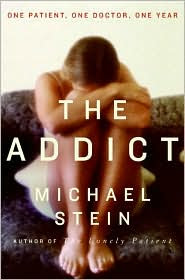 The Addict: One Patient, One Doctor, One Year

(pub date April) is a non-fiction book about Dr. Michael Stein, a doctor who treats addicts . The book follows, in part, the first year of Lucy Fields’ attempt to get clean. Her drug of choice? Vicodin. While tracking the progress of Lucy, Stein writes about other patients who have succeeded and failed and about why he became a doctor and why he treats addicts.

It’s not the best book in the world, unfortunately. Stein asks too many rhetorical questions, sometimes in never ending chunks of question marks. But I still think it’s a book worth reading because it tells the story about how some people become addicted, and how they can’t just stop. I won’t tell Lucy’s back story because it would ruin the narrative of the book, but another of Dr. Stein’s patients was a mother of two and business owner who took one Vicodin and liked how it made her felt — and she kept using. He also worked with a chef who could always find pills from other cooks in the kitchen.

The best parts are when Lucy talks about how people make comments about addicts around her — while not knowing he’s an addict. One person even puts them on the same grouping as terrorists. Have you ever heard someone throw around judgments about folks they know nothing about? It seems to happen to Lucy all the time, which both shows that addict don’t always look any different than the rest of us, and that books like this can help tear down those stereotypes, even if they’re not completely engaging works of literature.

I used to avoid books like The Addict: One Patient, One Doctor, One Year

. I dated someone with a serious alcohol problem, and addiction books or tv shows or movies send me back to that place, at least mentally. No fun. But the more time that passes from when he broke up with me (about two years now), the more interested I am in the subject. I think I’ve healed enough to look back at what happened and almost see it as something that happened to someone else.

He used to describe himself as the “train with no brakes.” One drink turned into 12. He set and re-set boundaries to tell himself he had things under control. If he kept it to the weekends, and it didn’t affect work, then he was fine. Then, when I started getting text messages at 3 a.m. on weekdays, it was OK if he had to drink on a weekday because his friend had a tough day.

No fun. It’s the only relationship I can honestly say I’d never relive, even if I should have learned some lesson in the process. The experience crushed me and has affected every relationship I’ve had since.

But it also forced me examine my relationship with alcohol. I quit drinking for about six months this year because I felt I was using it too much, but why? The best I can come up with is that this summer was stressful with my book out, and that I was scared. I’d climbed this huge professional mountain — a book! I published a book! — and didn’t know what to do next. I was and still am terrified about becoming a one hit wonder. It’s a problem a lot of type-A women have, so I hear. I also dating someone who I thought was way WAY out of my league. So going out and drinking was an escape front thinking about those things, and me trying to be someone I’m not (who is someone who likes red wine but can’t have too much of it or she gets sick).

I guess the point of this rambling is to show that even if a book isn’t the best thing you’ve ever read, it can still be an important read, like this one was for me. Very enlightening.

. It’s a harrowing story of her alcoholism. It’s not told with a hint of Lifetime movie schmaltz. It’s a very rational and clear account of something terrible that happened to her — it’s a book that gets five stars from me.