Book 18 of 52: Healing Through Exercise

If you work out, you probably know this already: exercise makes you feel good.

In Healing through Exercise: A New Way to Prevent and Overcome Illness-and Lengthen Your Life

(pub. date March), Jorg Blech explains why, culling together a lot of research about how exercise can heal and/or prevent everything from asthma to cancer to Alzheimer's to ADHD.

Blech starts by throwing the idea of "bed rest" right out the window. Resting doesn't always do a body good and can even slow or prevent healing. He writes at length about exercise and cancer, how patients undergoing chemotherapy can benefit from exercise.

Some of the research is obvious -- exercise can help throw back adult onset diabetes -- and others not so much. Who knew that relaxing after a heart attack is, according to a lot of research, not a good idea because it's better to build those muscles back up? And Blech isn't talking about heavy duty workouts here, either -- usually 30 minutes of walking or cycling five times a week.

I was most shocked by information about asthma. I had exercised induced asthma in high school, and used that and a torn ligament in my shoulder as reasons not to exercise in college and beyond.

But I run now and don't have issues with either (except when it's incredibly cold -- then I feel the asthma). Berg writes: "Children with asthma are often excluded from physical education and are encouraged to take it easy, which actually makes their troubles worse: Muscles waste away, which makes the children even less able to breathe properly, starting a vicious cycle. Regular moderate exercise would instead improve their bodies' resilience. Although the illness is not cured, people with asthma can become better at increasing the threshold for attacks, thereby avoiding them."

Interesting. I remember having some trouble with asthma when I started running three years ago, but I thought I'd grown out of it. My shoulder hurt, too, when I started, but that pain's mostly gone since I built up muscles in that area rather than leaving it be. I still hurt sometimes, but it's only a tenth of what I felt before.

Berg is harsh on pharmaceutical companies and hospitals, and even though I'm not really a fan of either, I think he goes to far. I interview doctors about research for work I do with the University of Pennsylvania School of Medicine, and they're interested in healing people any way they can -- especially the researchers trying to figure out why our bodies do what they do so they can prevent disease. Berg insinuates that all big pharma cares about is money, and holds many doctors in the same light. I just don't see that being the case. I'm also not convinced when he says that exercise can prevent cancer. Yes, there's a lot of evidence that it helps, but I there's so many other factors to consider in that equation.

Still, it's a book worth reading, or at least skimming, especially if you or someone you know could use a healthy dose of exercise in their lives. And it's interesting too, which isn't always easy to do in such a research heavy book. The book's been stuck in my head since I started reading on Thursday.

For fun, I put Blech's theory to the test. Well, it was more of a necessity. I'm writing this blog post from St. Pete Beach, Florida. I'm on the board of directors of the University of Tampa National Alumni Association. What a great excuse to get in some February beach time!

My first night in town, I'd stayed out late with a group of law students in town for a mock trial and dentists attending a conference (sorry, mom, I do talk to strangers, and it's fun). I woke up the next morning feeling sluggish and worn down. I closed my eyes and told myself to take it easy and go back to sleep, but that's not what Blech would do, so I got up and ran four miles.

And presto! I felt much better when I got back -- and a lot better than if I'd stayed in bed. I don't think it would have worked if I was hung over, but the workout helped me shake off the sleepies.

Blech has great things to say about running, too, which is something I worry about. I obviously love to run, but my mom's worried about its impact on my knees. I've seen a lot of senior runners out on the road between my 4 miles on Thursday and the 7.5 miles I did today. Blech writes: "And yet physicians traditionally thought older people would not have these capabilities. When older runners started attempting marathons, doctors and organizers wondered if they would need additional care. But these runners did just fine: older athletes can reach the finish line just a comfortably as younger ones."

I have one more day in Florida -- well, less than that since I'm leaving at 6am tomorrow. I wish I could have stayed longer. Wouldn't you if this was your view? 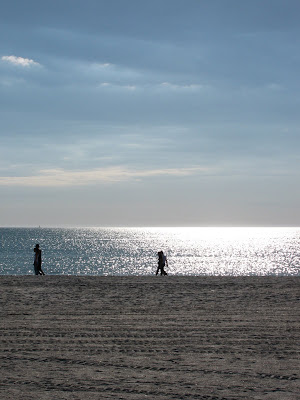 And you could walk to the Village Inn? 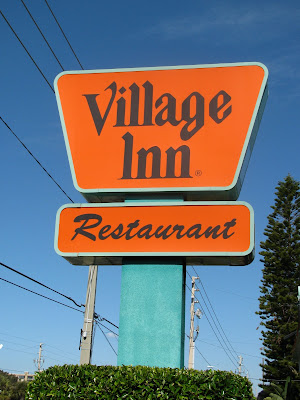