Review: A Race Like No Other: 26.2 Miles Through the Streets of New York

I finished Liz Robbin's A Race Like No Other: 26.2 Miles Through the Streets of New York

on Saturday -- the day before the 40th running of the New York City Marathon. Her book details the 2007 running of the marathon, focusing on the front of the pack and a lot of people in between.

The book is organized per mile, and laces the race's history through the runner stories. It's no small race, either -- it's run by over 40,000 people a year.

The book is good, but not perfect. At times, the narrative wobbles, and Robbins repeats herself. But it's fascinating for a runner. I never gave much though to a race game plan before reading this book. Who knew I could create a run strategy, just like a basketball play? The book's also pricked up my interested in this year's race. I ran a 10k on Sunday, and kept checking Twitter for marathon updates at the post-race breakfast.

I've been toying with the idea of running a marathon for some time now, and I might finally be ready. Could I go out and run one? Probably, albeit it slowly with walking. But if I'm going to run one, I want to RUN it and at least try to be competitive.

I'm already race ready for a half marathon (I'm running the Philadelphia Half Marathon on November 22) and could continue on that base to reach marathon level. We'll see how I feel after the Philly Half. If I manage to run that race in under 1:37, I automatically qualify for the New York City marathon, and I'll take it as a sign to run it. But I doubt that's going to happen unless Jesus himself pushes me. More likely, I'll put my name in the lottery and pick a spring marathon. 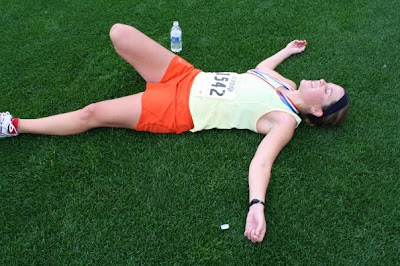 Anonymous said…
Congrats on the 10K!

Have you read 50/50 by Dean Karnazes? He runs 50 marathons in 50 days, many with first time marathoners. The book is full of great tips. I'm reading it now and it's deceptive how running 50 marathons dwarfs the challenge for most people of running just one, plus it details many of the marathon paths for most states.

I live in NYC so I'm not sure if I could handle the self-imposed pressure of running in my home city. I'm considering Chicago, Portland or Maui myself.
November 5, 2009 at 10:02 AM

Jen A. Miller said…
I haven't read it, but I will check it out

Funny you say that about hometown marathon. I'm consdering out of town marathons, too, but I think that's more because I want to run in spring, and the Philly Marathon is in the fall. I'm thinking of the New Jersey Marathon (which, while in my home state, is a haul to get to) or the Gasparilla Marathon, which is in Tampa. Why that one? Well, I went to college in Tampa, and it's the last year for that marathon. So we'll see!
November 5, 2009 at 10:34 AM