Review: Wild Romance: A Victorian Story of Marriage, a Trial, and a Self-Made Woman 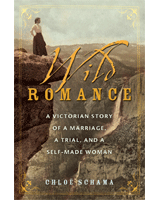 Chloe Schama did not set out to write about Theresa Yelverton. She tucked herself into the British Library to research "sensation novels," books from the Victorian era that, while popular then, have not stood the test of time. Schama discovered Theresa Yelverton in a footnote to one such story, about how the bigamy trial she brought against her husband served as inspiration for one such story.

Schama tells Theresa Yelverton's story in Wild Romance: A Victorian Story of a Marriage, a Trial, and a Self-Made Woman

, a dense but fascinating look at women's rights in a society when a woman's value was strapped to her husband.

Her case sounds like a Victorian version of "he's just not that into you" -- Theresa meets William Yelverton on a steamer from France to England in 1852. The two stayed up all night talking, and started swapping letters, at first fervently. As time passes, Theresa writes more frantically than Yelverton. She's like the woman waiting by the phone for the guy to call.

Eventually, though, the two meet up again and are "married" in a way that was legal in Scotland at the time: They pledged to each other that they were married. Theresa worried this would not be enough, so they were married again in a church in Ireland with no witnesses.

Imagine Theresa's surprise when Yelverton marries another woman and begins having children with her. This could have ruined Theresa, so instead she accused him of bigamy, and media frenzy that was a little bit Chicago and a little bit John & Kate ensued at the trial.

This is all fascinating, of course, but the book gets really good when the trial is over and Theresa decides to travel the world and write about it for magazines and newspapers. How could I not love the woman? I'm jealous, in fact, that she saw a world partly industrialized, and wrote about her travels along the way.

It's an amazing story about a self sustaining woman who, in spite of great and public heartbreak, made something of her life. I'm sure the book's being published in March to coincide with Women's History Monthly, as it should be.

The only sad part? That some attitudes toward woman haven't changed. I'm a single, professional woman with what I'd like to think is a viable writing career. But the pressure to be attached to a man is still intense, from family, friends and I admit, a little bit from myself. I sometimes think something's wrong with me for not being married at 29, which is silly of course.

But I'll explore that further in the next review. I think this is the first time I've had two reviews stacked up -- I was in Florida for the last few days and read two books on the trip without a chance the blog. The next one is contemporary, but about the same things. Women, our issues never change, do they?