Review: The One That I Want by Allison Winn Scotch

the DAY before I left on vacation. I've enjoyed Allison's first two books, The Department of Lost and Found

and Time of My Life

. I've also followed along as she transitioned from freelance writer to novelist (she still freelances but not that the level she used to), so I feel a separate sort of joy in reading her work.

The One That I Want

is about Tilly Farmer, a 32-year old high school guidance counselor who works at the same school where she was once a student. She married her high school sweetheart, settled in that same town, and expected her life to spool out from there.

But everything's not OK in Tilly's world. First, her mother died of cancer when Tilly was in high school, which tore apart her family. It kicked off her father's drinking problem. Her younger sister became one of those stick thin aspiring musicians who ran off to Los Angeles at the first chance and comes storming back into town to raise everyone's hackles. Tilly and her husband have fallen into a well worn groove, and while Tilly thinks everything's perfect, it's not.

This unease is amplified when a chance meeting with a forgotten middle school friend enables Tilly with a curse/gift. She can flash forward to see what happens to people in her life, which sets the novel in motion.

It's a good book. I read the first 150 pages on the plane. It's better than Allison's first novel, but I liked Time of My Life

better - it was my top fiction choice of 2009. I don't have a lot in common with Tilly Farmer. While I wasn't itching to get out of dodge after college, I didn't want to continue the life I had before. I "got" Jillian Westfield, protagonist of Time of My Life

, more. Jillian is allowed to see what would have happened to her life if she'd stayed with the bad boy instead of settling down with someone else. When I read it, I was wondering the same thing about the former badboy (read: asshole) from my past. I thought about that book for weeks after it was over. This one? Not so much.

But that doesn't mean it's not a good book. I know plenty of women like Tilly Farmer who will have the same experience I did when reading about Jillian Westfield. And for a beach book, it's perfect - a quick yet thoughtful read. It comes out at the perfect time, too - June 1.

So have you ever had the same experience? Where you like one author's works better than others based on whether you can identify with the main character?

P.S. Forgot to add the pic of where I read the rest of the book. Ah, vacation...so soon a memory. 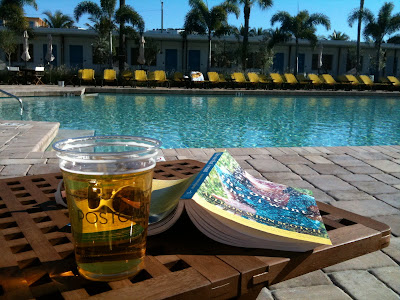 Trish Ryan said…
Interesting perspective--I never thought about how sometimes, when you have a different a reaction to a book by an author you've liked before, it's not about the story so much as where you are in your life when you read it.

Jen A. Miller said…
Trish - It doesn't happen often. Time of My Life was one of those books that shocked me to my core, so it was bound to happen (and, yes, I did chat with Allison before I wrote this review!)
February 2, 2010 at 5:10 PM

Anonymous said…
I love your honesty and I have to agree -- I'm more likely to love a book if I identify with the main character, but I can still like it and appreciate good writing, like you have. Can't wait to read Allison's latest, and the one she's working on now about a woman who loses her memory and must rely on others to fill in the gaps.
February 2, 2010 at 5:21 PM

Allison Winn Scotch said…
Hey guys!
I TOTALLY see what Jen means, and I feel the same way about books, so I think this is very fair - I don't always "click" with a character, but that doesn't mean a book wasn't good - it just means that my take-away was different than what someone else's would be.
Thanks for writing this up, Jen!
Allison
February 2, 2010 at 6:00 PM