On Romance Reading and Writing 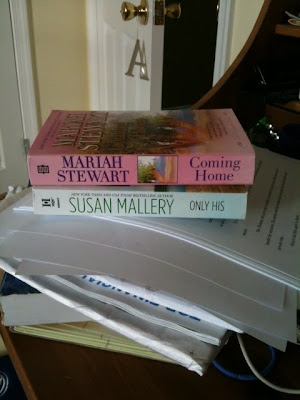 I spent the week before Christmas on vacation in Providence, RI. Before hopping on that Amtrak train, I hit Barnes & Noble to stock up on a genre I'm further studying: romance novels.

It's a not-so-hidden secret that I'm a fan, and I've attempted to write one before, though half heartedly. This fall, I made major steps in that direction. I have 40-something pages of my first real shot at a novel almost done (the photo includes pages that are part of that manuscript), and I'll be submitting a sample from that book to a competition in January. I have a pen name picked out, too, but I don't know if I'll use it. More on that in another post.

While I've read romances and I'm a member of RWA, I've stuck to a few authors whose work I know I'll love, so for vacation, I went judging books by their covers, honing in on contemporary romance whose authors had hit the New York Times bestseller's list: Only His

by Susan Mallery and Coming Home

1. Both of these books are parts of larger series, and include more primary and sub characters that I'd ever seen in other types of fiction, even other types of romantic fiction. This makes sense from a sales point of view. If you get a reader hooked into the Fools Gold series or the Chesapeake Diaries, then they'll keep buying books in that series. So in my book, I've upgraded two of the minor characters to have slightly larger roles, and when I pitch this book to agents, I'll be marketing it as part of a series.

2. Geography is big. Both series are very tied to locations. The ties to that place is another factor in the book. I already had that (two guesses as to where the book is based haha), so I'm good there.

3. Willing suspension of disbelief. In Only His, the hero's company is building a casino. The mayor says that no one objected. Oh PLEASE. But it's not an important plot point because the book is focused on the people. The people!

4. This isn't quite what I want to write. I get the idea of multiple characters for series, but both books were a little bit too cluttered for me. I think Nora Roberts has handled this well - the heroine of the next book might be a prior book, but the hero rarely is. And the backstory of that minor character is only hinted at until she gets her whole book.

It's a good start, and a less than painful way to have conducted research while on vacation.

And if it sounds like I'm taking a very pragmatic, structured and studied entry into writing these kinds of books - well, I am. Why not!

So if you read romances, too, who are your favorites?

Elizabeth D said…
Jen, you should read Rachael Herron, Her third book just came out; you don't have to read them in order, but it's more fun that way. Also, Barbara Bretton.
December 30, 2011 at 5:59 PM