Book 6 of 52: The Impossible Lives of Greta Wells by Andrew Sean Greer

On this blog, I try to review books the day that I finish them. Here, I want to record that gut reaction. It’s what I think makes this blog different than, say, a review of a book that I’ll write for American Way magazine, or do an interview with the author.

But I waited 24 hours before even thinking to write about Andrew Sean Greer’s The Impossible Lives of Greta Wells. I wanted to give myself some time to digest it. I even dreamt about it last night.

The book opens with Greta Wells in New York City in 1985. Her brother, Felix, has recently died of AIDS. His partner is dying, too. Her boyfriend of 10 years had an affair with another woman, then left. She is in such a steep depression with nothing else working that her doctor recommends electroconvulsive therapy – what used to be called electroshock therapy.

After she has her first treatment, she goes to bed and wakes up in her room in her apartment in New York City, but something is very different: the wallpaper, the furniture, herself. She has long red hair. She’s wearing a long yellow nightgown.

She’s woken up, as herself, in 1918, before the end of World War I and in the middle of the flu epidemic. This Greta, too, is undergoing the same kind of therapy. When she’s shocked again, she wakes up in 1941, right before the bombing of Pearl Harbor. The people in her life, for the most part, are there in those other worlds including her brother, who is alive.

“What difference could it make the era in which we are born?”

And that’s the heart of this story: how much can you change? Knowing more about the people around you, could you change them, too? Her brother is alive in 1918 and 1941, but not living openly as a gay man. Can she help him? Can she fix things with her former lover, to whom she is married in these earlier times? Did she want to? Was he even the same man? Was she the same woman?

When I read the description of the book, I worried that this would be a book about wanting to living in another era, about a woman who felt she was born in the wrong time period. Fortunately, it is not that. After a few shifts in time, I forgot that this shifting back and forth in time with the same cast of characters is really an impossible thing. Instead, I wanted to know what’s going on in the next Greta’s life. Each one was rife with conflict, heartbreak, and extremely difficult decisions.

It’s easy to forget, too, that the book is written by man. I saw a lot of myself in Greta (woman of a certain age, recent break up, wondering what am I going to do now?) Obviously, women’s rights were not the same in each of the areas to which Greta leaps, but not so terribly different:

“Why is it impossible to be a woman? Men will never understand, men who are always themselves, day after day, shouting opinions and drinking freely and flirting and whoring and weeping and being forgive for it all. When has a woman ever been forgiven? Can you even imagine it? For I have seen the plane of being, and nowhere upon it is the woman tracing her life as she always dreamed of it. Always there are the boundaries, the rules, the questions — wouldn’t you prefer to be back home, little lady? — that break the spell of living.”

I’d quote more, but I’d be giving part of the plot away. There are too many passages in the book to share, but I want you guys to discover them for yourselves. You’ll have to wait, though – it won’t be on sale until June. But put it in your calendar. Do it now. It’s well worth the wait.

On a side note, I was in Manhattan on Monday. The book includes a map that marks the location of Wells’ apartment – part of a little alley called Patchin Place, near the campus of NYU. I thought maybe it was made up. 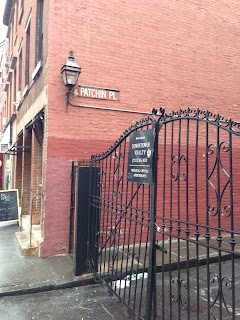