Book 16 of 52: How to Sleep Alone in a King-Sized Bed by Theo Pauline Nestor

I picked up Theo Pauline Nestor’s How to Sleep Alone in a King-Size Bed: A Memoir of Starting Over

at the Wild Mountain Memoir Retreat in Leavenworth, Wa., this weekend. The conference was about – you guessed it – memoir writing, and it was organized by Nestor herself.

I’d read some of the presenter’s books alreading, including Wild: From Lost to Found on the Pacific Crest Trail

by keynote speaker Cheryl Strayed, but I’d never heard of her before (sorry Theo!) I enjoyed the classes she taught this weekend, so this is the one I bought.

It starts with Nestor putting a chicken into the oven, and by the time she takes it out, her husband’s gone. The book chronicles the year (or so) after that moment, with flash backs giving insight into Nestor’s own feelings about divorce, which include being split up from her sister because dad got Kathy and mom got Theo after their owner separation. As a child of divorce myself, I could relate to some of the anger, hurt and guilt. I think I got lucky, though. I was in college when my parents divorced, and I knew they weren’t right for each other. I was relieved when it was over between them, and I think they’re both much happier now.

But it still hangs a big cloud over my perception of relationships, which I’ve been thinking about a lot since my own breakup. This passage rang true. It’s a quote not from Nestor but another writer friend. “As far as I’m concerned…there are two camps of people. Those of us who lived through our world being ripped in two and those who haven’t. Those who haven’t can try, but I don’t think they can ever understand how ill at ease we are, how we are always waiting for the other shoe to drop.”

I had more to say about the book – other than I really liked it – but I took the red eye home and sat next to a man who maximized his seat space but taking up some of mine. So I’m a bit fuzzy.

BUT! I can share a few pictures of our retreat spot, which is called Sleeping Lady. It’s been a while since I sucked down some crisp, clean mountain air. I didn’t so much enjoy the high altitude running, but it sure was pretty. 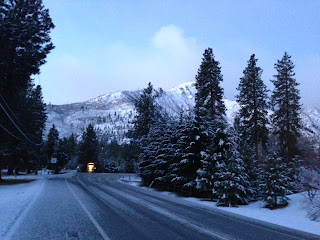 I spent some time in Seattle, too. I knew about the Space Needle (of course), but had no idea so much other World’s Fair architecture had been saved. This is the Pacific Science Center, which had been part of the United States Science Pavilion, which was part of the 1962 Worlds Fair 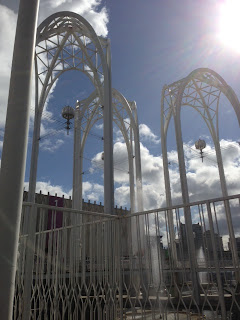 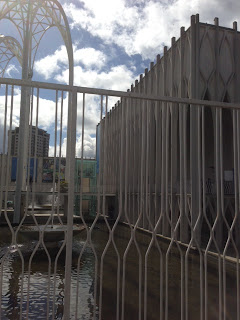 I also stumbled up on this little diner/bar called Mecca while looking for a quiet spot to eat on Monday  not easy since it was St. Paddy’s Day and most people I passed near my hotel had been drinking all day. Behold, a few of my favorite things: 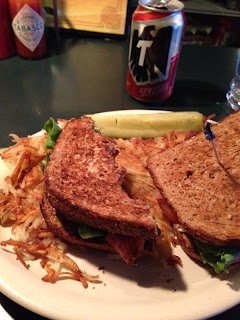 I have mixed feelings about the retreat itself. I heard a lot of great things that I think will help me with my own memoir project (which is way stalled), but some of the classes were duds. Maybe it’s an East Coast/West Coast writer thing, but some instructors seemed more focused on the no/low pay zine model than, say, writing essays from your book for magazines and real money. The only other magazine writers in the group were friends who came with me. We felt a bit out of place.

One more note: in 2008, I got stuck in the Phoenix International Airport and noticed that a lot of books for women featured the back of someone’s head.  Go look at the cover of Nestor’s book again.