Book 2 of 52: Empire of Mud: The Secret History of Washington, DC by J.D. Dickey 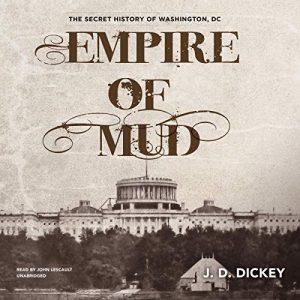 Whenever I went to Washington, D.C., I think about how orderly it is. Just about everything is on a grid, with Metro riding through it. Free museums, great buildings, great works of art, lots of fun things to do (in non-COVID times). Every visit is a treat. When I started freelancing and thought I needed to move for my career, I was must closer to moving here than New York City. I wound up staying in New Jersey (and I’m glad I did), but D.C. still has a special place in my heart.

But wow, was it really a shit hole for most if its formal existence. I don’t mean that in a figurative way either. Sewage used to run right into the Washington City Canal (which still flows under Constitution Avenue), and when the canal backed up? That sewage backed up right into basements and streets.  It was a lawless, dirty, humid stinking mess, so much so that the capital was almost moved to the mid-west (with buildings!) to start all over again.

I knew a bit about D.C.’s less than wonderful beginnings through the books listed below, but J.D. Dickey lays it all out in Empire of Mud: The Secret History of Washington. Its formation is much more complicated than what Hamilton the musical represents (it’s Broadway, it can’t get that deep, but it’s a deep backstory!)

At one point, one out of every five people in Washington City was enslaved. It was known for prostitution the same way Tampa is now for stripping. One historian said that it was more lawless than Tombstone. Tombstone! After listening to this book, that makes sense. While the book was published in 2014, and didn’t go into D.C. most recent push to become a state, Dickey does lay out why that’s still such a mess, and also why so many of the city’s residents still live in poverty.

I didn’t jot down the historian who made the Tombstone comment because I listened to the end of  Empire of Mud while on my way to Florida, and I don’t even talk on the phone when I drive (still don’t think it’s safe, even with handsfree options), so please excuse! That’s also why this review is short. I’m currently hanging out in a hotel in Savannah, Ga. avoiding anti-mask people (my hotel won’t do room service because of COVID but also won’t make guests wear masks because nothing matters anymore), and I’m looking forward to finishing up this review and doing, well, nothing.

Also, yes, listening to a book still counts as reading. I won’t tolerate any ableist nonsense that says otherwise around here.

As before, those are affiliate links, but I also got Empire of Mud and all the books above for free via Libby app, as provided by my library. I highly recommend!
Like this post? Buy Jen a cup of coffee.