Book 4 of 52: This Time Together: Laughter and Reflection by Carol Burnett 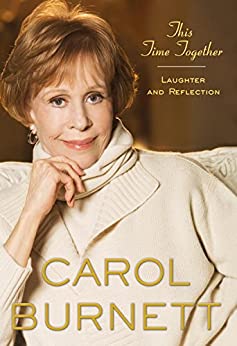 This Time Together: Laughter and Reflection by Carol Burnett isn’t a straight memoir – Burnet wrote that, One More Time: A Memoir, in 2003. Instead, it’s a anecdotes that she often told in the Q&A sessions before tapings of The Carol Burnett Show, and then on tour. I say performances for a reason: listening to this book is like listening to her on stage.

These stories have the polish of well practiced storytelling. And there’s nothing wrong with that of course! Burnett is supremely talented performer – I would expect no less from her reading her own audiobook. This format also means that she could do her not so great Marlon Brando impression, and her wonderful and well known Tarzan yowl (my heart also broke she also struggled to read the chapter about her daughter, Carrie, who died of cancer in 2002).

Burnett was a wonderful companion to have in my ears while I drove out of Key West, up the Gulf Coast of Florida, and over to Walt Disney World (I finished it on January 24, but was a little busy in Disney and then in Cannonball Running it home to beat this weekend’s winter storm).

Her telling also fit in well with other stuff I’ve listening to recently, including the third season of The Plot Thickens, about Lucille Ball (one story told in the podcast comes from Burnett, which she also includes in her book) and also the memoirs of Mel Brooks, Carl Reiner and Betty White. In the case of Reiner and White, their audiobooks have become piece of history that live on after their deaths in 2020 and 2021, respectively. I’m glad that their stories about the early day of television comedy are recorded in print, and in sound too. Their stories often overlap as well – Burnett gave of interviews about her friendship with Betty White after she died.

One warning: this book includes one very fat-phobic story, the kind of anecdote was pretty common about 10 years ago (the book was published in 2011) but wouldn’t easily fly today.

Burnett also published another book, In Such Good Company: Eleven Years of Laughter, Mayhem and Fun in the Sandbox, specifically about The Carol Burnett Show, in 2017, if you’re more interested in that. I picked up a copy of that book at a Little Free Library someone on my big “see the 18 states I hadn’t been to yet” (I think in South Dakota?) road trip in 2017, but haven’t read it. I, ah, might have misplaced it sometime since then.

Burnett is also touring again, if you’d like to see her in person (and feel safe doing so!)

I got this book the Libby app via my library, for free. I’ll often pick audiobooks by searching for non-fiction and what’s available now. Usually works out!