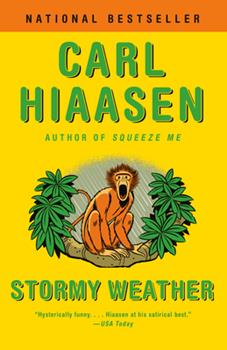 I don’t always try to match my reading to what I’m doing, but when I go to Florida, I try to pack at least one Florida weird book. There was no better novel to bring with me to read on a ferry from Key West to Dry Tortugas National Park, than Carl Hiaasen’s Stormy Weather.

Hiaasen was writing about #floridaman before #floridaman was a thing (and when this – # – was the pound sign). Stormy Weather is set in 1992 in the aftermath of Hurricane Andrew, which is still the most destructive hurricane to have ever hit Florida, and only one of four hurricanes to make landfall in the U.S. still at Category 5 strength. According to the Miami Herald, Hurricane Andrew destroyed 63,000 homes and damaged another 101,241.

Such disasters bring out the best in humanity but also the worst. Fraud flowed into South Florida in Andrew’s wake. That’s where Stormy Weather comes in. From an advertising executive who yanks his new wife away from their Walt Disney World honeymoon to record storm damage to sell to TV stations; to a petty thief who decides to fake owning a home for the insurance money when her plan of snagging a Kennedy didn’t work out; to a thug nicknamed Snapper because his jaw didn’t heal quite right; to a one-eyed misery man named Skink who, well, I don’t want to ruin the surprise for you- it’s a grab bag of cheats and crooks and those pulled into their orbit.

It’s a silly, dark fun time. It made me love Florida and hate Florida at the same time (which is pretty much where I’ve stood on things since heading to college in Tampa in 1998).

Since this is my site and I can write whatever I want, I’m going to also throw this out there: I think Stormy Weather is ripe for a TV or film adaptation, for two reasons:

Hiaasen’s books have had mixed success as films. The 1996 Demi Moore film Striptease was based on his novel as was the so so 2006 movie Hoot (though it had quite a cast, including a young Brie Larson).
Maybe he isn’t interested in Hollywood anymore, or he isn’t up for it. His brother Rob Hiaasen was murdered in Capital Gazette shooting, and in 2021, he retired from his column at the Miami Herald (though he says he still plans to write books). But perhaps now’s the time to bring Stormy Weather…into the light (I’m SORRY I can’t help it).
I finished this book when I got home. It’s cold and rainy here. Doesn’t this look so much nicer? 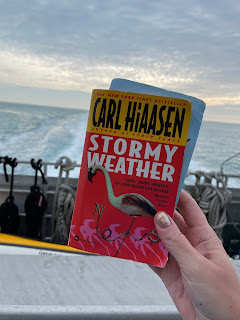 Someone who goes to the same Little Free Library as I do has been putting Hiaasen books in it since it opened. This is the third one I’ve grabbed. So thank you to whoever is doing that. But also: you left a cursed drink coupon inside (look at the expiration date). 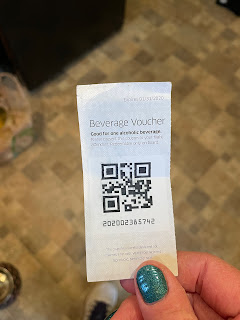