Book 6 of 52: Mouth to Mouth by Antoine Wilson 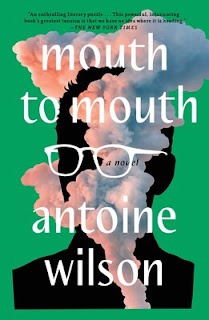 The narrator of Antoine Wilson's Mouth to Mouth is an unnamed, middling writer waiting for a flight to Germany after taking a a red eye from Los Angeles to JFK. While sitting bleary eyed in the terminal, he hears the name "Jeff Cook" over the loud speaker. He went to college with a Jeff Cook, though he didn't know him that well. He was kind of person whose circle overlaps yours but you don't know well, but since you see each other over and over and over again, becomes part of the background of your college experience.

It's a common name - could it be the same Jeff? It is, and he's waiting for the same flight, which is delayed, so he brings the narrator into the first class lounge with him. Over the course of the delay, Jeff tells the narrator what has happened to him starting  not long after graduation, which lead to him being the kind of guy who only flies first class.

Told in this round about way (the narrator relays Jeff's story, switching between telling it from the time Jeff experienced it, and them talking in the first class lounge), Wilson gives the story a layer of suspense that wouldn't wouldn't have existed in a more traditional format. Plus, since it's Jeff's version of the story, which he tells as he proceeds to get drunk, we as readers (and the narrator too) can't be sure if he's telling the truth.

It's an odd little book, only 178 pages with short chapters, and some of those chapters are less than a page long. I wasn't sure where Mouth to Mouth was going until the very last line. Wilson perfectly holds the tension until the very end, which I can't say about any other novel I've read in recent memory.

Linda Holmes of NPR's Pop Culture Happy Hour (and the delightful novel Evvie Drake Starts Over) recommended this one, which is where I first heard about it. I'm glad she did.