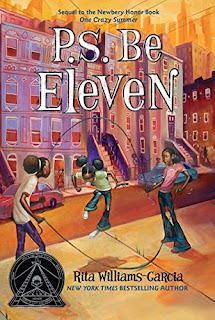 In 2014, Slate ran a piece about how adults shouldn't read young adult fiction. The subhead said that readers who do should be "embarrassed when what you're reading is written for children."
I know that writers don't always chose their headlines or subheads, but the writer dug in deep in the text of the piece, chastising "fellow grownups" that "at the risk of sounding snobbish and joyless or old, we are better than this." Well, yes, she sure did sound like all of those things!
I've linked to the piece but am not naming the writer because she got the backlash she deserved for shaming other people's reading habits (and she's reporting now, not writing commentary, which is probably a good thing for all parties involved). I don't read a lot of YA or middle grade books, but I read a lot, and I'm not going to exclude something that looks interesting just because it's a story told from a younger point of view.
Such is the case of P.S. Be Eleven by Rita Williams-Garcia, a middle grade novel about three girls growing up in the Bed Stuy neighborhood of Brooklyn in the late 1960s. The story is told from the point of view of Delphine, the oldest of the sisters, who turns 12 during the course of the novel.
She experiences pressing issues of a lot of 11/12 year old girls, including worries about clothes and school and friendships and boys (will she go with someone to the sixth grade school dance???) But there's also the Civil Rights movement (her mother is a poet and Black Panther living in Oakland - the girls visit her in the first book in this series, One Crazy Summer), the Vietnam War, drug addiction and the assassinations of Martin Luther King, Jr., John F. Kennedy, Jr. and Bobby Kennedy. By reading about this through the words of a child, even fictionalized, I'm seeing those events from a different perspective, and not one I'd get from a non-fiction book, or a historical novel for adults.
It's also a reminder that kids know about what's going on in the world. They learn about hard things, whether their parents want them to or not. When I was 11, I knew about the AIDS crisis and the Gulf War. I remember Peter Jennings reporting on the night the war started, watching on a TV set that was also a cabinet. I also remember when my uncle died of cancer, and when my dad's cousin died in a helicopter accident. If I were to write a novel based on my life then, set in that time period, based on how I experienced those events and tragedies, I think that viewpoint would be of value to other adults, especially those who came of age later than me. And I'd hope they'd read it too.
I've listed a few historical books meant for younger readers below. I think they're worth reading, no matter how old you are.
And nuts to anyone who tries to police what you read, especially right now. The same goes for when someone says that listening to an audiobook isn't really reading. What ableist nonsense.
For Further Reading: