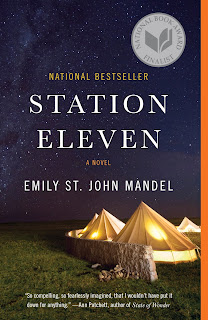 In the early months of the pandemic, I started working on a story for the New York Times about what I saw as two groups of people: those who ran towards pandemic-related books, movies and art, and those who ran away.

The story never got off the ground (I was assigned other stuff, I couldn't get the right experts, I was burnt out of covering [waves hands] and didn't want to chase a story that wasn't coming together when there was SO MUCH ELSE to write) but one of the books that came up over and over again in the "run towards" group was Station Eleven by Emily St. John Mandel.

Station Eleven is a novel about a pandemic where the contagion (called the Georgia Flu) is exponentially more lethal than the one we're still dealing with now. It's mortality rate is over 99%, and when 99% of people on the planet die, so does almost everything else that those people made work. It's not just the internet that no longer exists, but electricity too. And phones. And cars. And airplanes. And most of civilization.

The book focuses on a handful of characters who are all tangentially connected (exactly how unravels over the course of the novel), held together by the travels of The Symphony, a band of actors and musicians who travel along Lake Michigan performing music and Shakespeare. They started by trying newer stuff, but stick to Shakespeare because "people want the best about the world," a musician says (but also: Shakespeare was writing during plague times himself).

The narrative dips back and forth between their currently reality (20 years after the Georgia Flu), life before, and in between. It reminded me of Alas, Babylon a 1959 novel by Frank Patrick, which is set after a fictional nuclear war. The characters in both books confront a lot of the same problems (anyone who relies on medication dies first, gas isn't an unlimited resource even with far fewer people) though in Alas, Babylon, there's also the reality of nuclear fallout (Will anyone be able to reproduce?)

I had the same reaction to both books: they scared me more than a bit, and infiltrated my dreams. I also had a bad reaction to a medication while reading Station Eleven, and I can't tell if I was dreaming or hallucinating about being part of The Symphony, walking alongside their flatbed truck that was stripped down of almost anything that had made it a truck, and pulled by horses.

Back to that New York Times story that never was. I have stayed firmly in the "run away" group, and have tried not to read anything agonizing while reporting on the pandemic. I've shifted away from that writing now, partly from burnout and self preservation, and am instead focusing more on business topics (I've written a lot about supply chain) and basic science (like breakthroughs in cancer research that could change people's lives). Station Eleven came up again because of the HBO limited series that debuted in December. I wanted to watch it, so I finally ordered the book, because I'm that person who wants to read the book first.

I still don't know if I was ready to read it, though I found it to be beautiful and heartbreaking and a portrait of humanity that despite having violence (sometimes vivid violence) is perhaps kinder than what I see in this world today, where people threaten the lives of health experts because they don't want to wear a strip of cloth across their face and block means of international commerce because they won't take a vaccine that'll save their lives.

It also captures, in the scenes of just before, the eeriness that I think a lot of us felt when things began to fall apart here, even though Station Eleven was published in 2014. Jeevan, one of the characters the story follows, gets a call from a doctor friend warning him that the virus, which has just started coming into the news, is serious, and to get out of the city — and if he couldn't, stock up on groceries. I was in New York City in late February 2020, when health officials focused on hand washing but masking wasn't a thing yet. I remember looking giving one of my New York Times a look when she said she'd see me for our next meeting in June. "I don't think so," I said. She's still not back in her office, and may not be by June 2022 either.

I'm going to try the series (I know it's different, I can even see that from the previews), but I wanted to sit with the book a little while before I do. I don't know if my fellow "run away" readers are ready for a pandemic, or ever will be, and that's perfectly okay. This trauma is going to last a long time.

Speaking of COVID (sigh), my COVID diary enters year three next month. It's 283 pages long, single spaced. Why you should keep a diary about this time was one of those New York Times stories I did write that pushed the to/from pandemic art aside.