Station Eleven the series, and a note 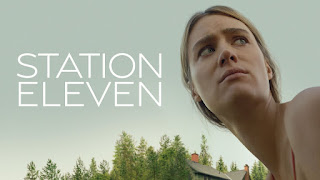 Despite saying that I needed a bit of time to process the book Station Eleven, I dove right into the HBO miniseries adaptation, and watched all 10 episodes in two days (and in those two days, I wrote an edited 8,500 words of copy, yes I am VERY tired).

The series is different than the book in terms of the plot, but it still holds the same core values of finding beauty in the darkness, the importance of community, and also the importance of trust. Giving these characters bigger and wider lives was the right call too. In the book, Arthur Leander, a fading actor, is a core character. In the series, he's more a winch around which everyone else wound until the world fell apart. It was an extremely smart decision, and I commend the folks who worked on the series of for it.

I also give them kudos for being able to start a show about a pandemic before a pandemic (they shot the first two episodes before the world shut down) and then come back to it. I found it stressful enough as a viewer living through a pandemic. I can't imagine as an artist working through it.

I read the book first, then found the series. Did you find the series first and then read the book? I'm curious about your experience with taking them in that order. Drop a comment below if you'd care to share!

Also, a housekeeping note. When I started this blog in what feels like a different lifetime, readers could get each post emailed to them via Feedburner, which Google deactivated last year. I'm trying to find an easy way to allow that capability again because I know a few of you have asked (this is one way in which deciding to just fire up the old Blogger site is coming back to bite me, though I still think it was the right decision to get the site back up again while preserving the archives, even if I later decide to move things).

UNTIL THEN: you can subscribe to my freelance writing newsletter, which will include links to reviews, or you can join the Book a Week with Jen Facebook page, which I have also revived.