Book 10 of 52: Putting the Rabbit in the Hat by Brian Cox 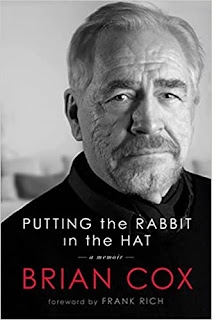 When I first started listening to the audiobook of Brian Cox's Putting the Rabbit in the Hat, I wasn't sure why I was there. I've watched Succession, sure, where he plays the media titan Logan Roy. I enjoy it, but but I'm not obsessed with it (I watched most of the show while running on a treadmill).

But I'd listened to Cox do Wait Wait...Don't Tell me, an NPR news quiz, and tell a story about how almost everyone at his first wedding got very drunk except for him, which was a bit of a problem since most of the guests were also starring in Romeo and Juliet, and they had a performance that night. Plus he and Michael Gambon (one of the drunk wedding guests ) also had a matinee performance of Othello. This might be worth giving him a few hours of my time, I thought, and then, when I was unsure about the book, worth sticking with it.

I was right. Putting the Rabbit in the Hat is the story of a poor kid from Scotland who became a working actor, and what he learned/saw along the way. A friend and I joke that all of British TV is made up of 10 actors and three sets, and he shows we're not far off. An incomplete lists of names he drops in the book: Michael Gambon, Alan Rickman, Richard Harris, Alec Guinness, Natasha Richardson, Brendan Gleeson, Gary Oldman, Vanessa Redgrave, Ashley Judd, Ian McShane, Ed Norton, Michael Caine, Ian McKellen, Nigel Hawthorne, Keanu Reeves, and, of course, Steven Seagal. A scene with Seagal is the opening of the book. They starred in The Glimmer Man together (he later writes fondly of his string of action movies, but yes Seagal is weird).

His resume included a couple of surprises, at least to me, including a 1995 traveling production of The Music Man. He was also in an unaired episode of the show Urban Myths, playing Marlon Brando along with Stockard Channing as Elizabeth Taylor and...Joseph Finnes as Michael Jackson. That last bit got the episode torpedoed, but you can see a trailer here.

I like listening to celebrities read their memoirs. There's something to hearing Cox say "Harry Fucking Potter" that you wouldn't get by reading a physical copy of book (he said he was probably the only actor in England who wasn't in the series, and that he'd most likely have played Mad-Eye Moody, but Brendan Gleeson did a better job than he'd ever had done). And of all the celebrity memoirs I've listened to, this may be the most frank and honest. He doesn't hide from anything, including himself, and writes about how he was a bad husband and absent father to his first wife and their children from that marriage. He didn't do it in a self pitying way, or to drum up sympathy from the reader. He's a guy in his 70s looking back at his entire life, and saying "yeah, that's where I fucked up, maybe you can learn from me" (as he seems to have done himself with his second marriage).

Cox also doesn't hold back in writing about other people. He calls Johnny Depp "so overblown, so overrated," followed by "I mean, Edward Scissorhands. Let's face it, if you come out with hands like that and pale, scarred-face make-up, you don't have to do anything. And subsequently, he's done even less." He likes Ian McKellen as a person but doesn't like his kind of acting, called Ed Norton "a nice lad but a bit of a pain in the arse," said Michael Caine is also not his favorite, and that Quentin Tarantino is silly and superb.

He also wrote about working with people he found were problematic after the fact (a thing I've also written about), and it came off as...fine? It was very much "I liked working with Woody Allen but..." and "Kevin Spacey is a talented actor but..." It didn't feel like he defending them but sharing his experiences while leaving space for listening to victims. He did, however, say very clearly that he was creeped out by Harvey Weinstein and lamented what Weinstein did to Ashley Judd's career (Cox and Judd starred together in Kiss the Girls).

There's a bit about wokeness and cancel culture that had me rolling my eyes, but it felt more genuine than, for example, Gourmet editor Ruth Reichl writing about a party she went to with Mario Batali in her 2019 book Save Me the Plums, with an added bit about #metoo that felt forced into the book by an editor and/or lawyer (she also side stepped questions about Batali in a few book-related interviews, including one in the LA Times). I have a pretty good bullshit meter, and none of what Cox wrote felt malicious or aggrandizing. It was more what a self-professed "dinosaur" who also calls Spike Lee one of the greatest filmmakers of all time and made sure to use Eddie Izzard's correct pronouns might write when trying to make sense of the world.

I liked it. You may too.