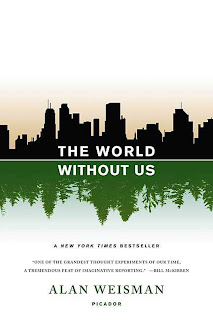 In my travels, I've accumulated photos in what I call the "Plants Where They Shouldn't Be" series. They're of weeds, flowers and trees growing in places that look uncomfortable: poking out of lava that's OK to walk on but warm enough to generate steam, growing around a mile marker on the road, sprouting on the back of a parking sign - that kind of thing. On the cheesy side, they're reminders that we can flourish in the most unlikely circumstances. On a more realistic end, they show that humans are constantly battling back nature, and that someday we'll probably lose the fight.

I thought about those photos when I read book 8 of 52 Station Eleven (and watched the HBO Max adaptation), which show a world without 99.99 percent of our current human population. The story focuses on people, of course, but set them in a world where the things humans have created - electricity, internet, buildings, bridges, roads - are being taken back by nature. A Jersey Shore amusement pier owner once told me that anytime you build something next to the ocean, the ocean tries to tear it down. Same goes for plants, insects, animals, you name it, or else I wouldn't be fighting weeds every spring and summer. If humans were to disappear, they would immediately start reclaiming their ground, and move into my house.

That's a "long story before the recipe" way of getting to Alan Weisman's The World Without Us, which has been on my to-read list for years. I remembered it because of its title, and its striking cover image of a city reflected as trees, and ordered a used copy while still reading Station Eleven. I'm a process person, and I wanted to know how would our stuff fall apart?

The World Without Us tell this, with mixed results. Weisman answers a lot of my questions: when would bridges collapse, and how? What would happen to buildings, streets, nuclear power plants, my home? He doesn't give a reason why we'd vanish, which is fine because that's not relevant to his thought experiment. What does happen without us is (though did interview Les Knight, founder of the Voluntary Human Extension Movement, who said that even the worst virus "could never get all 6 billion of us. A 99.99 percent die-off would still leave 650,000 naturally immune survivors." That's pretty much Station Eleven, though some survive by being in the right place at the right time).

The problem with The World Without Us is that it's both wandering and overstuffed. Weisman takes tangents into areas like mortuary science and looks into the effects of climate change on our world - two fascinating things but not always relevant here.

He packs the book with details that just don't matter, which I don't think is entirely his fault. It was published in 2007, when including too many details was in style. I was a full-time freelance writer by then, with clips in the New York Times and working on my first book. One of my magazine editors told me that if I didn't include what the subject of my profile was wearing in the first paragraph of the story, he'd send it back for a re-write, whether the fashion choices made sense to the profile or not.

The reason for all this was to make readers feel they were sitting with you, but also to show you were there. Weisman takes every opportunity to let you know yes he was there. For example, he goes on a helicopter tour in West Virginia and tells us that his pilot is a "cheerful redhead," quotes her once, and we never hear from her again. Yes, we get it - you took a helicopter ride, how nice of you to have that budget. But describing the pilot added nothing to the book and instead trips up the narrative. This happens over and over again to the point that I stopped marking examples.

Even if this did make for sometimes dull reading, I don't know how much I can knock him for including those descriptors because, and as I wrote about in a previous book review in this series, times and preferences and styles change. But I can ding him on some of his choices. In writing about HIV, he refers to what today we'd call "sex workers," and who at the time most people, including myself, would have described as "prostitutes." Instead he uses "whores." He likens non-native species spreading across new lands to soldiers raping women during war. I had the same feeling reading this as when I read William Least Heat Moon's Blue Highways and didn't get why it's so revered when just about every woman is judged based on whether or not she was worth trying to fuck.

I checked the acknowledgments and yes Weisman's the editor for this book was a man. I hope that if someone tried to publish words or comparisons like that today, they'd be edited or removed from the book. I just can't see that flying right now, given that readers, writers and editors are more aware of this kind of sexist language. In 2007, I'm sure I would have been offended but I was taught to let it go or else I might offend a potential business contact in the future, or get labeled as stuck up or hat I just "can't take the joke," even if the joke is about rape. Around then, I interviewed Pauly Shore about a project I don't remember, and he grabbed my foot in the middle of the interview. I was told to make it a fun, zany part of the story. I don't think anyone would ask me to do that now now, but I didn't feel like I had a choice then.

Of course I know it's not better everywhere, and that my experience in this industry means I can make different choices now. When I didn't sell a book about my road trips on the first shot, I fired my now former agent instead of bending into whatever image of fun lady writer, who wouldn't make fun of four-door Jeeps or women's magazines lest she upset potential book editors (yes really), she wanted me to be. I can afford to make those choices and take those stands. I'm not really sure what I have to lose at this point by being honest, but I think more people would agree with me, at least about the sexist language and the foot grabbing, than in 2007.

Anyway, here's my favorite photo from my "Plants Where They Shouldn't Be" series, which I took at Hawai'i Volcanoes National Park in 2017: 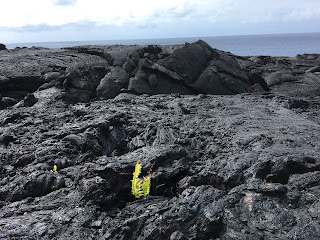 Speaking of how things never last, that's a Border's sticker on my copy: 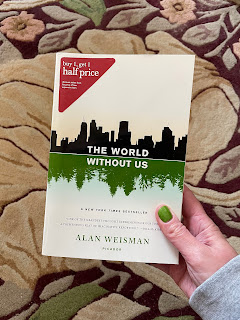 A few things before I go: