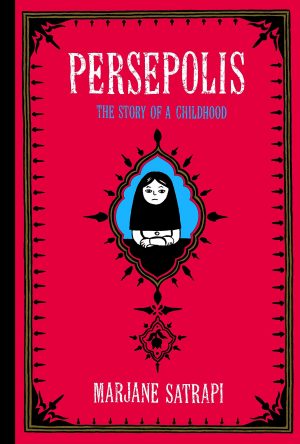 Marjane Satrapi is an author and graphic novelist who grew up in Iran and, as a tween and teen, lived in the country through the Iranian Revolution before her parents sent her to Europe for school, and for her safety.

As an adult, she wrote Persepolis: The Story of a Childhood, a nonfiction graphic novel, originally in French. I read the English translation, which was published in 2003, three years after the original. It was a critical success, won a slew of awards, and became a movie. I haven’t read the sequel, Persepolis 2, but I hope to (you can also buy them in a set. I found Persepolis in a Little Free Library, or I’d have bought them combined).

In the tradition of Art Spiegelman’s Maus, which is about the author’s father talking to him about the Holocaust, Persepolis is a memoir of trauma told through a mix of images and words that when combined, combust into powerful, beautiful and soul cracking art.

For example, Satrapi portrays the 1978 Cinema Rex fire as already skeleton-faced souls trying to flee for the theater’s exit, and the 1978 Black Friday Massacre as rows of heads with blank, dead eyes. These images are searing, and I don’t know if she’d have made the same impact by just writing about it.

Persepolis also a memoir of war from a child’s perspective, and shows how much she absorbed even with parents trying to protect her. And while it’s not exclusively for kids, it’s about one (and the notes in my used copy suggest a young person first owned it). I wrote about this in the review of Book 11 of 52, P.S. Be Eleven, that kids are going to know of terrible things happening, and parents and caregivers can can help kids rather than pretending bad stuff doesn’t happen. I guaranteed that, just like I knew about the start of the first Gulf War as an 10 year old, American children know that something bad is happening in Ukraine right now, whether parents are talking to them about it or not.

I also wrote in that review that children try to make sense of hard things, and guidance from parents, teachers, and literature can help. On Twitter recently, Joe Ziegja asked if his followers ever created any fan fiction. I responded that I wrote a sequel to Bridge to Terabithia by Katherine Paterson. I don’t remember what I wrote in that sequel, but the source material is a lot about death. When my uncle died at 33 years old of cancer, I was eight. My parents didn’t discuss it much, and I was confused about what to do with all my grief (I missed him), anger (that my cousins lost their father) and fear (would my dad die too?) Bridge to Terabithia helped.

Blocking kids from reading about tragedy (as McMinn County, Tenn. schools did when they recently banned Maus, and Bridge to Terabithia is frequently on banned book lists) insults their intelligence, and isn’t going to stop them from living through turbulent times, whether that’s in their home or the world. Instead, restricting access to literature that deals with these topics is just going to make it harder for kids to process what’s going on, and make them less empathetic to the experiences of others (and yes I know, that’s the one of the points of these horrific laws).

After reading Persepolis, I checked to see if it’s been banned, and yup. In 2014, it ranked second on the American Library Association’s most frequently challenged books list. And that’s a shame. There are so many parallels to what Satrapi experienced and what is going on in Ukraine right now. Kids should be encouraged to read and learn about these things instead of being told to pretend that whatever their parents don’t think is appropriate (which in some states in the U.S. is a range of topics about gender, sexuality and race) doesn’t exist.

I was going to make a joke that I picked another hit book from the ’00s to keep this blog as irrelevant as possible. But after writing this, I think this choice is as timely as when it was first published.