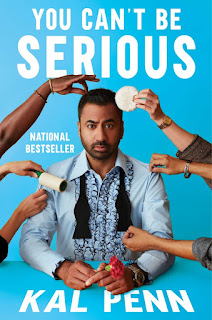 I first saw Kal Penn as many elder millennials did: as a supporting character in National Lampoon's Van Wilder, and then as the co-lead in the much better and way funnier Harold and Kumar Go to White Castle. I heard that he'd taught at Penn and did...something in the White House? But that was about it. So I went into his memoir, You Can't Be Serious, skeptical about what I would learn.

A lot, it turns out. This guy can be serious. The memoir is funny, of course, but it's Penn (whose real name is Kalpen Modi but uses Kal Penn as his byline, so I'm going with that here) retelling his Hollywood story, from growing up in a mostly immigrant community that didn't understand why he went into acting and not the sciences, to having a very real job with the Obama administration, to his baby, the series Sunnyside, making it to NBC but getting kneecapped from the start.

Penn grew up in North Jersey, the son of Indian immigrations, with grandparents who marched with Mahatma Gandhi as part of the India independence movement. He was both picked on for being Indian, but also embraced by his Jewish friends (and found a lot of similarities between his grandparents and their grandparents, many of them Holocaust survivors).

He took a leap into Hollywood through UCLA. While still a student, he started taking a very nose-to-the-grindstone approach to making it as an actor. In addition to classes, he worked for a shady producer who wouldn't consider Joseph Gordon Levitt for roles because he looked "too Asian," and said not to hire "chicks" unless they were "hot." He also went to lots of auditions, even if they were the few roles written for South Asian actors, and almost all of them were loaded with stereotypes. He changed his acting name to Kal Penn (which is his first name chopped in half) in hopes of at least getting in the room to try out for some roles. That lead to him once being told the show wouldn't consider him unless he was at least partly Hispanic. He was, apparently, the wrong kind of brown.

His big break came in Van Wilder. He initially fought back against doing an Indian accent, but writes about why he did it anyway. It was a huge opportunity of course, but he also saw a full, meaningful character who was essential the plot. He also worked with the writers and director to change some aspects about him to make the character better (for example, his costumes went from traditional Indian style clothing to American, as an exchange student trying to fit in might have worn).

When Harold and Kumar came out, I didn't think it was a big deal, but to have two Asian men leading a movie that turned into a big hit, back in 2004, was revolutionary.

Let's watch the trailer, for funsies.

A very silly but very fun buddy comedy! For Penn, it opened the doors to things like the movie The Namesake and long runs on the series House and Designated Survivor.

As for "something at the White House," he really was a member of the Obama administration. Penn began volunteering for the campaign in 2007 and took a break from his acting career to serve as associate director of the White House Office of Public Engagement and Intergovernmental Affairs.

I didn't know any of these details when I hit "buy" on the You Can't Be Serious. I also didn't know Penn is gay. He doesn't mention it until 40% of the way through the book (I listened to this as an audiobook), where he made a short aside that he was dating men as part of a very funny story about going to a (female) strip club for a friend's bachelor party.

He also writes about how he met his fiancé Josh just like any other cute meet - which it was. There's no teeth gnashing about having to come out, what his parents thought, or the public, or his fans, etc. There was no big People magazine cover story. It was a far difference experience than when his Harold & Kumar co-star Neil Patrick Harris came out in 2006 (which he writes about this in his own memoir, one I also recommend). Times change, thank goodness. Penn being gay is the same thing as me being straight. It just is, despite laws proposed by hateful politicians trying to say otherwise.

As for Sunnyside, what a bummer. The comedy, which was about a disgraced politician teaching immigration classes, was held back out of the gate. Penn writes about his joy in launching his own sitcom with a diverse cast and crew, and the agony of finding out that his show was getting a sliver of the financial backing and publicity push as another then-new, mostly white Thursday night NBC comedy, which Ad Age broke down here - they got numbers that Penn had been denied by the studio.

This comes at the very end of the memoir (the show was cancelled in fall 2019, and the book came out in fall 2021), and Penn somehow manages not to conclude on a down note. He's far more gracious about the whole thing than I would have been.

I picked up You Can't Be Serious because, as I've written before, I love listening to celebrities reading their own memoirs, even if I'm not that familiar with the life of said celebrity. It worked out when I chose Putting the Rabbit in the Hat by Brian Cox for book 10 of 52, and it was also a good choice here.

Arun said…
Great review. I'm going to listen to it for sure. I enjoyed Harold and Kumar, of course. But I really loved The Namesake. I connected with his character in many ways.
March 28, 2022 at 11:32 AM