Book 15 of 52: Wishtree by Katherine Applegate 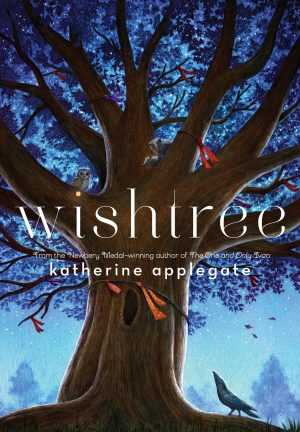 As I wrote last time, I picked book 14 of 52 because I wanted a book small enough to fit in my bag during a trip to New York City. I picked Wishtree by Katherine Applegate for book 15 of 52, also for convenience: as a member of Libro.fm, I get one credit for one audiobook per month. I had four days until my next credit went live. What to listen to until then?

Wishtree is about three hours long, and available for free as an audiobook through my library. And thus I found another great title because it happened to be the right book at the right time.

Wishtree is a middle grade book about a tree (and birds and skunks and spiders) that can talk. This isn’t relevant at first because they don’t talk to people, but the fact that it’s a wish tree is.

I thought this was made up, but no: wish trees, where people make wishes to a tree, is a thing in cultures around the world. This wish tree, a 216 year old red oak, is of the Irish tradition, as the original owner of two homes by the tree was an Irish immigrant. On May 1, people from around the neighborhood write wishes on slips of fabric or paper and tie them to the tree. It’s an event the tree looks forward to every year.

But the book isn’t really about a tree, but about a Muslim family who recently moved into one of those two homes, and is being harassed by their neighbors, and how the 10-year-old daughter Samar just wants a friend.

I appreciate that the book has a positive ending but isn’t wrapped up with a tidy bow, because life isn’t that way, especially when it comes to racism and xenophobia. But it’s still a nice tale, and I didn’t mind listening to a tree talk to me for three hours, even if it’s a book meant for kids (because we read whatever we want, remember?)