Book 9 of 52: The MacGregors: Serena and Caine 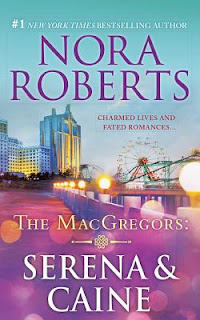 In my post about Station Eleven, I wrote about two groups of people, those who ran towards pandemic fiction at the start of COVID, and those who ran far away from it. I was 100% in the latter group. Reading wise, that meant delving into genre fiction: crime, thrillers, suspense, and of course romance.

You might think that these are different, and they are, except in one way: I know what's going to happen at the end. Just like I know Detective Bosch in Michael Connelly's books is always going to figure out who did it, I know that, in a romance, the two leads are going to have a Happily Every After (known in romance circles as an HEA).

I craved predictability in my reading, whether it was about solving a murder or matters of the heart (and in some romances, you can have both!)

Romance, as you might already know, is maligned despite it being a publishing powerhouse. According to an article in Fortune Magazine, romance made up 18% of adult fiction sales from March 2020 to March 2021, and was the second most popular publishing genre in that span (a share that, yes, grew during the pandemic). I wrote a long piece for the Washington Post in 2018 about why romance is big business but mocked: it's largely written by women and for women, and has also embraced diversity and equity in terms of gender, race and sexuality before most other publishing segments (though that's not true across all of romance, and the Romance Writers of America is having problems themselves).

I've been reading romances since I was a teenager, and my Grandmom Miller used to give me her Nora Roberts books when she was done with them. That's most likely how I got a copy of The MacGregors: Serena and Caine (today retitled The MacGregors: New Beginnings). The version I have was published 1998. I was a freshman in college then, in Tampa, and homesick as hell. Grandmom most likely gave me a copy of this book when I went to visit her and my grandfather on the other side of the state (and I read it or whatever book she gave me while lying on my favorite lounge chair in the corner of their sun porch, a place I still dream about even though they both passed away several years ago).

I say "this version I have" because the book was first published as two in 1985 — separately — as Playing the Odds and Tempting Fate. They're part of a still thriving tradition of the romance novel series, where a publisher produces a book a month with the same general themes, often having one writer do a group of books about people in the same social circle (you can usually pick out which supporting character is going to get a book of their own down the line).

At the time, a reader could pick up any book with "Silhouette Special Edition" on the cover and know that they were going to get an HEA, with sex (which is not the case for all romances because an HEA doesn't always mean sex while dating, particularly in "sweet" romances). Silhouette started this line in 1982, and it's still going though it became Harlequin Special Edition in 2011. They're closing in on title number 3,000 in the series. Three thousand! Talk about publishing success!

Why tell you all of this? First, because I think it's interesting. In the late 1990s/early 2000s, when most people still bought physical books in physical stores, I worked at a Walden Books and interacted with fans of these romances (I told this story in that Washington Post piece). It also gives a background on the career of Nora Roberts, who is a titan in the publishing industry even if she's moved away from romances and focuses more on thrillers these days.

And it also brings me to problems with this book, which are not surprising for any text published nearly 40 years ago. While the story holds up - hot people meet, have conflict, bang a lot, have another conflict and then get married! - the specifics don't. In Playing the Odds, our hero (another romance specific term) is Justin Blade, a Native American casino owner, who meets our heroine, Serena MacGregor, when she's working as a blackjack dealer on a cruise ship. She's clearly attracted to him, but Serena has valid concerns about dating a stranger who, when it comes down to it, won't take no for an answer when she refuses to go on a date with him.

Today it reads as creepy in the same way a lot of 1980s movies do, even if Roberts makes it very clear that Serena is attracted to Justin (she also has the sun setting over the Atlantic Ocean in Atlantic City - whoops!) Tempting Fate is about their siblings: Caine MacGregor and Diana Blade. There's less of that hero to heroine pressure, but the language surrounding Diana's Native American heritage is bad, as it is in Justin's book.

Why even bring this up? Because I chose to read the book out of a longing for comfort of something familiar, especially after having my brain rattled by Station Eleven. I remembered the wrong detail about the sun setting over the Atlantic Ocean (and an over glamorizing of the Atlantic City International Airport, which through the 1990s had the option of parking in a free dirt lot), but not the other stuff.

I just wrote about finding out that the author of book one in this series is currently spewing transphobia from her twitter feed. This is not that. This is looking at a now historical text, and reflecting on what we can learn about it today. Roberts published her first book in 1981, so this was only four years into her career. She's changed, and her writing has changed, both in terms of skill and in how she writes about different groups of people, so I can't knock her for something she wrote in 1985, especially when she was writing on themes and using terms that were generally acceptable by the publishing industry then. Roberts' writing has evolved, just as mine has since I started writing for an audience in 1998 as a freshman at my college newspaper. I've written a few things I wish I could take back, or write again knowing what I know about that topic. I don't delete those posts or try to have old articles scrubbed from the internet. Instead, I try to do better now.

I also think looking at the past in romance helps show how far the genre itself has come. Romance still carries around the stigma of "bodice rippers" where the hero assaults the heroine, and when lazy non-romance readers pontificate on romance, they often reference these books despite them being from half a century ago, which just perpetuates this idea that romances are out of touch. That's not the case, at all. Romance covers just about anything you'd want to read today. You can find Amish romances, NASCAR romances, queer romances, military romances, cowboy romances, sexually explicit romances, and beyond. Harlequin still has a line of "rich people banging" - it's called Harlequin Desire, if that's what you're into.

Even though I've been re-reading some old favorites, today I gravitate more towards historical romances, where the authors puzzle through how what modern audience understand about gender and sexuality fit in a different time period. Cat Sebastian writes excellent queer historical romances with gay, transgender, gender non-binary and asexual characters. Of course these folks existed before we came up with these modern terms. Well, how? And what did an HEA mean in that setting? It's neat.

Anyway, I've rambled enough. I used a more recent edition's cover at the top of this post. Here's the cover I have (it's not the same book as what my grandmother gave me, but I did hunt down that exact edition on eBay): 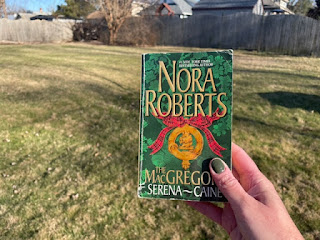 And here's the original cover of Playing the Odds. 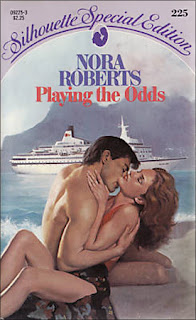 I laughed when I saw this, which I think is just fine, as is looking at older works with a more modern, critical eye.