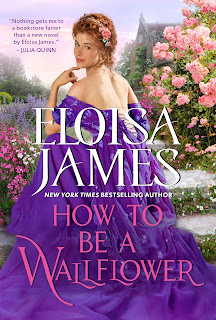 Romance novels always involve some kind of conflict. Without it, why would we read the 300 or so pages about how the two leads get together?

There's usually some sort of external force the characters unite to fighting against. And while there's some of that in Eloisa James' How to be a Wallflower, it's not heavy. Instead, James focuses on the relationship between the leads: Cleopatra Lewis, who inherited and now runs her father's "commode" business (as in, yes, toilets); and Jacob Astor Addison, an American looking to poach London's best costumer designers for the chain of theaters he owns in the U.S.

The conflict? Themselves. Cleopatra's mother had engaged in a series of short affairs with actors (often married actors) and left her daughter to clean up the mess, and it's skewed her views of sex, marriage and love. Cleopatra also knows that if she marries, her business becomes property of her husband, which may sound ridiculous, but remember that in the U.S. married women couldn't get credit cards in their own names until 1974.

Jacob had intentions of proposing to a family friend when he returned to the U.S. because the pairing made logical sense - until he met Cleopatra. He also has family baggage of his own. He changed his name from Astor to Astor Addison because his father died from opium addiction - a business from which his uncle build a fortune (John Jacob Astor really did make a lot of money smuggling opium, though James said she made up Jacob's branch of the family).

Our hero and heroine both want to own the same costume company, which is how they meet, though who gets ownership of the business doesn't turn into a huge battle. They're also not trying to solve a murder, find out who someone's real father is, and no one has to marry or else risk the destruction of their family reputation. While I don't mind books that include those sometimes life or death conflicts, it's nice to to have the book not bogged down in external factors when what I really want is to see how these two get past their internal struggles to end up together.

I've read just about everything James has written. I was a fan first, and then wrote a profile of her for New Jersey Monthly in 2009 - or, really, about Mary Bly, who is the person behind the pen name. She's a Shakespeare professor at Fordham who hid that she wrote romances until she got tenure. That's why I laughed when Astor Addison said he didn't like Shakespeare. I got the joke. (She also wrote the novel Lizzie & Dante under her real name but I haven't read that one yet).

I suspect we'll get a future book about some of the minor characters in this one, which I'm looking forward to. The tactic of linking books together through related characters may seem like a marketing ploy but, hey, it works!