Book 19 of 52: Gone Crazy in Alabama by Rita Williams-Garcia 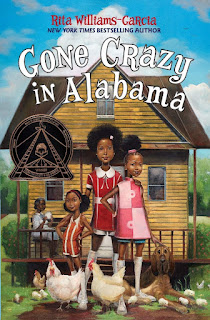 After reading Rita Williams-Garcia's One Crazy Summer last year, and the sequel P.S. Be Eleven for book 7 of 52 this year, of course I was going to read Gone Crazy in Alabama, the third book in the trilogy about sisters Delphine, Vonetta and Fern and their adventures in Brooklyn, Oakland and Alabama in the late 1960s.

In this book, they spend the summer in Alabama with their grandmother, Big Ma, who previously lived with them in Brooklyn after their mother left and moved to Oakland (hence the previous Oakland trip). After their father re-married, she moved back to Alabama to live with her mother, Ma Charles. They in turn live across the creek from Miss Trotter, Ma Charles' half sister, and the two are trapped in a bitter feud. Why? The book goes into all that of course - along with the usual "city girls in the country" doing things like collecting eggs and watching their cousin milk a cow, and the fights between the sisters. I'm one of four kids, and a lot of that continuous squawking, where you can go from playing cards to fighting in a flash, rings so very true.

It's great, of course. I don't need to write about all that again - just check out my review of the second book in the trilogy. But I do want to point you to two episodes of the NPR podcast Code Switch, one from 2017 and one from 2018, about discoveries people are making about themselves and their families through DNA testing kits, and how a Black Americans seeing they have white European DNA is often a record of "slavery, colonialism and genocide," to quote from one episode.

Code Switch looked through a modern lens and DNA technology. Gone Crazy in Alabama is set in 1969, 104 years after the last enslaved people were emancipated in the U.S. Evidence that Black and white families in the same town were closely related was much more obvious then, as Delphine finds out.

I haven't seen Williams-Garcia's works on any new banned book lists. They shouldn't be. These novels aren't "dangerous" or whatever nonsense is being said about books on what life is or was like for someone who is not a white straight Christian male, even if it's fiction based on truth (Williams-Garcia said she looked to her own journals when writing about the family experiencing the Moon Landing). Knowledge of other kinds of people isn't dangerous. It engenders understanding and compassion. I guess that's what people making these lists are so scared of (and also, apparently, babies).