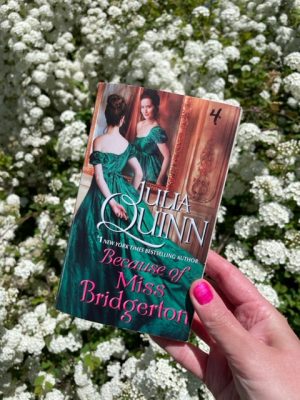 More romance? Of course! The world is on fire, and I can’t ingest all the fires all the time. Sometimes I want to turn to genre fiction as an escape, even if an escape is into a patriarchal society where it’s SCANDAL that a woman sometimes, when riding a horse, wears pants.

Because of Miss Bridgerton is the first book in Julia Quinn’s Rokesbys Series, which are prequels to her enormously popular Bridgerton Series (and now a Netflix show). These books are similar, of course, but instead being set in the Recency era of the 1810s, these books take place at the same time as the American Revolution (though still in England).

Here we meet Sybilla “Bille” Bridergton, who is stuck on the roof of a building because she chased a cat up there. She climbed up herself (scandalous woman!) but also twisted her ankle in the process, which is why she needs help to get down.

That help comes from George Rokesby. Their families are neighbors, and they’ve known each other since they were children. Billie assumed she’d marry one of George’s brothers, who she considers friends, but not the prickly George himself.

You can guess what happens: they fall in love! Not a shocker since romance is defined by having a  happily ever after (HEA). Which is one of the reasons why I read these books – not because I need vicarious courtship in my life, but because I know how the story ends. Same with Michael Connelly’s Detective Bosch Series. The bad guy is always going to get it, somehow.

If you’re a fan Bridgerton – books or show – and haven’t seen the news yet, Penelope and Colin’s story is going to be next. It’s not the order of the books, but it makes sense for a lot of reasons, including that they revealed Lady Whistledown’s identity earlier. And they should do what they want! The first Bridgerton book was published in 2000. Change can be a good thing.

Speaking of, you may have noticed that I changed the kind of photo used in the post. I’ve been matching my nail polish to my books (and sometimes, vice versa), and using that photo on Instagram. Well, enough of that. I learned how to give myself manicures during the pandemic, so I might as well show off that skill. Also, I buy a lot of used books, and I think the edition is read is part of the story too. I wonder why someone put a “4” in the corner. It’s a mystery!