Book 22 of 52: Farewell to Manzanar by Jeanne Wakatsuki Houston and James D. Houston 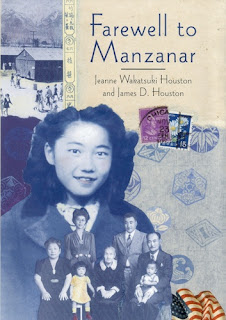 In 2017, I took a four month road trip to see all the 18 states I hadn't been to yet. On my first day, I picked up a Passport to Your National Parks, a blue booklet that lists all 423 locations that the National Park service oversees - not just the big National Parks, but also the national seashores, battlefields, historic monuments, etc.

Along that trip - and on many road trips I've taken since since - I've tried to visit as many of these sites as possible, collecting stamps at each one. It's a great way to figure out how to break up long drives - or pick targets, as I often plan trips around getting a few stamps. I'm scheduled to hit the upper midwest late this summer to do just that.

I've been to more than 200 sites so far. This quest has of course lead me to see some beautiful places - Yellowstone! Glacier! Grand Teton! But it has also steered me to locations of some of the worst parts of our country's history. In Arkansas, I stood at a critical point along the Trail of Tears at the Fort Smith National Historic Site. In Nebraska, at the Homestead National Historic Park, I learned about how homesteaders lived but also how the Homestead Act of 1862 was disastrous for anyone but white settlers. At the Statue of Liberty National Monument, I visited the Ellis Island Nation Museum of Immigration and saw a digital copy of my great grandfather's entry into the country, and Klu Klux Klan flyers warning about "the Roman Catholic Hierarchy."

The Manzanar National Historic Site in Independence, California is one of these critical National Park units. In Farewell to Manzanar, Jeanne Wakatsuki Houston (and her husband James D. Houston) writes about her experiences in the Manzanar War Relocation Center, where she and her family were sent in 1942 when she was seven years old. President Franklin Delano Roosevelt ordered the secretary of war remove resident "alien enemies" from the west coast. This was done despite Wakatuski Houston and her siblings - and many others sent to these camps - being U.S. Citizens. Not that her family members who had immigrated would have been eligible for citizenship anyway, per a 1911 U.S. Bureau of Immigration and Naturalization order that allowed the country to refuse citizenship to Asian immigrants.

Wakatsuki Houston published the book 30 years after Manzanar was closed, and while she tells her story in a quasi-diary format of a child's experiences, it's informed with the view of an adult, and includes contextualized commentary, like what it meant for their family to lose all their possessions, and how she views what she later realized was her father's abuse and alcoholism. She also writes about her experiences after leaving the camp, including recognizing what she could and could not do as Asian girl. She could be friends with white students, but she wasn't allowed to join their Girl Scout troop. She could be a baton twirler, but not reach a step up of "song girl."

In a chapter about going to high school, she writes: "To this day I have a recurring dream, which fills me each time with a terrible sense of loss and desolation. I see a young, beautifully blond and blue-eyed high school girl moving through a room full of others her own age, much admired by everyone, men and women both, myself included, as I watch through a window. I feel no malice toward this girl. I don't even envy her. Watching, I am simply emptied, and in the dream I want to cry out, because she is something I cn never be, some possibility in my life that can never be fulfilled."

After Manzanar closed, most of it was torn down - it wasn't meant to be a permanent place anyway. One of the most powerful segments of the book is when the Houstons go back to visit with their children. and the kids just see it as an empty, wild place because nature had once again taken over - though not entirely. The site became a California Historical Landmark in 1972 and a National Historic site in 1992.

Why did I open this piece telling you about National Park units if I haven't been to this one yet? Because I have written before on this blog about how important it is to confront the uglier parts of our country's past, in order to have a better understanding of how we got to where we are today. Hate crimes against Asian Americans jumped 339% in 2021, and a recent study found that 21% of U.S. adults believe that Asian Americans are at least partly to blame for COVID-19 pandemic.

That kind of anti-Asian sentiment and violence didn't just spring up in March 2020, or even with the election of Trump. It has long roots in the white nationalism that is the foundation of our country, and stoked by those who hope to return us to a white nationalist state. Ordering 110,000 people of Japanese descent - some of them U.S. citizens - is part of that long history of ugliness, and is not as far back in our history as you might think. Florida still had an alien land law, which prevented Asians from owning property in the state, on the books until 2018. Even though it wasn't enforced, what a horrible thing to have as part of your state constitution (though given what's happening in Florida, I'm not surprised this is where that lived the longest).

"You cannot deport 110,000 people unless you have stopped seeing individuals," Wakatsuki Houston wrote. Which is exactly what happened - and is continuing to happen today, against anyone who does not look like the kinds of people who have long been in power.

I'm grateful to the National Park Service for turning towards instead of away from these things. The summer of 2017, when I took that big road trip, was one of fights over Confederate flags and Confederate monuments. Arguments defending such repugnant symbols as being about heritage not hate seemed even more foolish when looking at how the National Parks handled similar ugliness. If someone wants to preserve the monuments instead of destroying them (as they should be), my suggestion was to give them to the National Park Service and let them put them into context, but my guess is that those defending them don't want that either.

I look forward to making it to Manzanar when I take another west coast swing to collect stamps. And if you do any traveling around the U.S., I encourage you to pick up a passport book. It might change the way you view your own country - for better or for worse, but at least it's a truer picture. 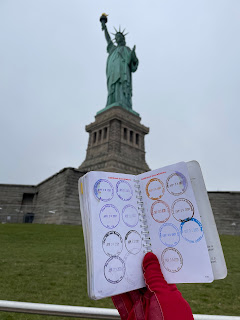