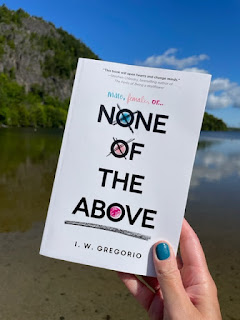 None of the Above by I.W. Gregorio was not chosen by me, per se. It's on the Vandegrift High School Banned Book Club reading list. The group formed in response to the Leander Independent School District banning a whole bunch of books for ridiculous reasons. These students wanted to read the books and discuss them anyway.
None of the Above was yanked by the school district because it features "sensitive topics" and "concepts of sex and anatomy," according to the Washington Post.

Yes, this book does such horrible things as recognizing that 18 year old ADULTS, who in Texas can buy assault rifles, might have sex. It's also cognizant of the very real fact that gender is not a pink/blue binary. The protagonist here is track star and homecoming queen Kristin Lattimer. After experiencing incredible pain when having sex, she's diagnosed as intersex. In Kristin's case, she has Androgen Insensitivity Syndrome (AIS), which means she looks traditionally feminine, but has male chromosomes. That means no uterus, a short vagina and two very small gonads.

How didn't she know, you might ask? Her mother died of cervical cancer when Kristin was young, and she was hesitant to talk to her father about why she hasn't gotten her period. It's also not uncommon (though not really a healthy thing) for runners to have irregular periods or no periods at all.

That the set up. The book is really about stigma, bullying, acceptance, and how growing up means you need to leave some people behind. When Kristin's secret gets out, her boyfriend breaks up with her and calls her horrible names. She's labeled a hermaphrodite (which is a slur) and temporarily taken off the track team because opposing coaches accuse her of being a man. Her locker is defaced. Cruel Facebook memes abound. She's worried she'll lose her college track scholarship. There's suicidal isolation, depression, and acting out in unhealthy ways.

The plot of "young woman goes through some stuff" could have started with anything that makes someone a target, which in high school can be minute infractions of whatever fellow students determine is its acceptable social code. But because in this book, it's gender, these Texas school officials don't think students should have access to it. That's the case even though None of the Above shows that if people understood what intersex means, they'd be less likely to ostracize Kristin.

That's because fascists want to label anyone who is not like them "other," which is behind all these trans sports bills, don't say gay bills, denying gender-affirming care, and all the vile things being pushed by the darker parts of society that are going to get people killed (more than already happens: 57 transgender or non-gender conforming people were shot or killed by other violent means in 2021, according to the Human Rights Campaign. And that's on top of the already higher rates of suicide among queer teens). Blocking access to books that manifest empathy towards marginalized people is all part of that plan. It's a stepping stone along the path of eugenics too. It's scary stuff.

Which is why I read the book, and why I.W. Gregorio wrote it. That's the pen name for Dr. Ilene Wong, a Philadelphia-area urologist who said idea for this novel came from her work. According to Main Line Today, None of the Above has sold more than 20,000 copies and has been optioned for a TV series. I bet more copies have sold since the Washington Post story. Some of the titles on the students' banned book list were out of stock when I tried to get them. None of the Above is currently backordered on Bookshop.org as I write this.

A few years ago, I wrote a story (no longer online) about the importance of having LGBTQIA+ specific elder care, and a researcher told me horrible stories about how intersex people were treated. That included doctors who would bring other physicians into exam rooms to look at their genitals, as if intersex people were circus side shows. He said that some doctors also took pictures of intersex patients without consent and shared those images without consent too. In this book, the first doctor Kristin sees does a terrible job explaining her condition, and only when she sees a specialist does she start to understand, and is connected with support groups.

When you don't see someone who is different as a whole person, this is what happens. None of the Above is a book that can help end marginalization - which is is why I'm so proud of those high school students for fighting against these book bans.

The pretty background? I'm in Maine. I finished reading this book at a picnic table by Echo Lake in Acadia National Park. Just some context as to why there's a random lake back there.