Book 28 of 52: The Duke Goes Down by Sophie Jordan 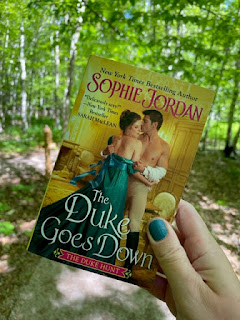 These are books you read even if you know they're not going to be the pinnacle of your literary experience. I read so many books, and am used to always having a book, that sometimes I want something I know is going to be OK and won't make me consider throwing my consciousness into a river. It's something to read to pass the time, not unlike falling into the familiar patterns of a cozy British mystery series, or Dateline.

The Duke Goes Down by Sophie Jordan is aggressively fine. It's fine! It was small enough to toss into my backpack while hiking in Maine (hence this picture), and something I could read in snippets while I finished vacation, then came home from vacation, and then pouted that vacation was over.

It does have some choice quotes though:

"Perry...had been in such a low state this last year, convinced a marriage of convenience was the only way to salvage his life. What a fool he had been. His life yawned before him. A blank slate. He could fill it anyway he wished."

"Her cousin had only ever lived a life of privilege...to such a degree that she could not fathom anyone living differently than she did. But then Imogen supposed that was the nature of privilege—the inability to emphasize with other people and their lot in life."

"Happily alone was better than miserable with someone. She heartily believed that, and she wondered why more women did not subscribe to that notion."

I recently found the twitter account "Does it Bang?" which is about romance novels and whether or not the main character have sex—because sex isn't part of every  romance novel. I can report that yes, this one bangs. Also: the title is accurate.